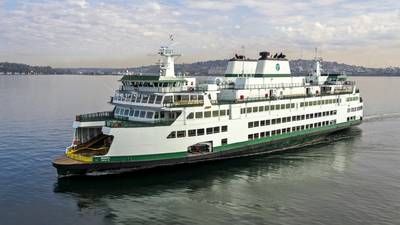 EBDG is responsible for redesigning the vessels to accommodate the major change in propulsion type without disrupting structural components. The ferries will operate on all-battery power during crossings or can revert to a hybrid, diesel-electric propulsion if required. Battery recharging will typically occur dockside at the terminals during offloading/loading procedures.

Earlier this year, Washington State's Legislature authorized a contract extension for Vigor to build up to five hybrid-electric versions of their 144-vehicle Olympic Class. The new-build authorization is a direct result of the 2040 Long Range Plan that identified the initial aspects of vessel and terminal electrification. EBDG was a participant of the plan and is now leading the effort for an additional, supporting addendum – the WSF System
Electrification Plan. The System Electrification Plan will identify a detailed plan for deploying hybrid-electric vessels throughout the ferry system.

EBDG has performed design work on the last 20 vessels built for WSF, and as been a major contributor to WSF's electrification efforts thus far by supporting hybrid feasibility studies and life-cycle cost analyzes for both the Jumbo Mark II and Olympic Class ferries.