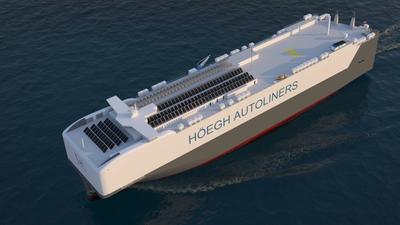 Höegh Autoliners is setting out to build what it claims will be the world's largest and greenest car carrier vessel.

The shipping company said it has entered a memorandum of understanding Chinese shipyard Xiamen Shipbuilding Industry targeting first vessel delivery by the end of 2023.

Designed for 9,100 car equivalent units, the Aurora Class roll-on, roll-off ships will be the world's largest car carriers. And their MAN B&W multi-fuel engines will be capable of running on various biofuel and conventional fuels, including liquefied natural gas (LNG). With minor modifications it can transition to use future zero carbon fuels, including green ammonia.

"With the future of cargos and zero carbon fuels in mind, the Aurora vessel is designed for a greener future. It is the most environmentally friendly car carrier ever built," said Höegh Autoliners CEO, Andreas Enger. "The Aurora Class represents a big step on our path to a zero emissions future."

Höegh Autoliners said the new vessel class will take advantage of the latest technology on everything from energy optimization to internal ramp systems, further reducing the company's carbon footprint and supporting the decarbonizing of its customers' supply chain. The ships will feature strengthened decks and enhanced internal ramp systems that enable electric vehicles transport on all decks and provide more flexibility for heavier project cargo.

"We are accelerating our decarbonization efforts to meet our net zero emissions target by 2040. Together with our customers and trusted partners we will make a significant contribution to a more sustainable maritime industry," Enger said.

Kjeld Aabo, director of new technologies at MAN Energy Solutions, said, "Reducing emissions is more important than ever. With the selected MAN B&W engine, Höegh Autoliners will be able to operate on various fuel types. After modifications of the engine, tank and auxiliary systems, the engine will be ready to run on virtually any future zero carbon emission fuels: including Ammonia."

Deltamarin CEO, Janne Uotila, said, "The Aurora class will be the world's largest PCTC and able to take future carbon neutral fuels, such as ammonia, which has been considered, for example, in the fuel storage design."