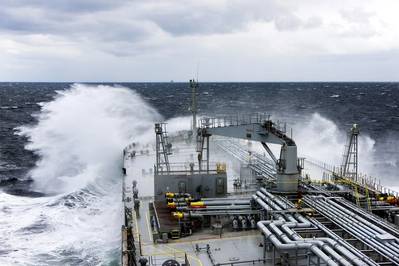 A levy on nitrogen oxides (NOx) emissions with revenues earmarked to fund the uptake of NOx abatement measures is believed to be the most promising tool to reduce these ship emissions by up to 70 percent, as revealed by a new study by environmental consultancy IVL and CE Delft.

The study, commissioned by Transport & Environment (T&E), identifies the policy options available at the EU level to regulate ship NOx emissions in the EU seas and compares them with the measures to be taken under the International Maritime Organization (IMO). In addition to a NOx levy with a fund, the study identified two other EU-level policy tools: mandatory slow steaming of ships (with a levy and fund as an alternative compliance option) and a standalone levy on emitted NOx.
The study, launched at an event in the European Parliament, comes in light of the ongoing failure by the Council to agree ambitious revisions to the National Ceilings Directive (NEC) governing land-based emissions, including NOX, thus putting greater pressure on member states to address ship NOx where abatement costs are far lower.
Faig Abbasov, clean shipping officer at T&E, said, “Ship NOx emissions affect all EU member states, whether along the Baltic, around the North Sea or the Mediterranean. This study provides a solution for all EU seas.”
The study compares ship NOx abatement options and their associated costs for the shipping sector with EU-level measures implemented either on their own or in addition to the designation of Nitrogen Emissions Control Areas (NECAs) under the IMO.
NOx contributes to particle and ozone formation and also causes acidification and eutrophication when deposited on land, lakes and seas.
T&E said NOx emissions from global shipping make up about 30 percent of all manmade NOx emissions. According to the European Environmental Agency (EEA), in Europe’s North Sea emissions are responsible for a significant proportion of nitrogen deposition in Belgium (13 percent), Denmark (17 percent), the Netherlands (17 percent), Norway (17 percent), Sweden (11 percent) and the United Kingdom (11 percent); while the Mediterranean Sea emissions result in nitrogen deposition in Cyprus (30 percent), Greece (21 percent), Italy (15 percent), Malta (51 percent), Spain (10 percent) and Turkey (12 percent). Contributions from the Atlantic Ocean result in depositions in Iceland (10 percent), Ireland (16 percent) and Portugal (19 percent).
“Ambitious EU action has helped slash air pollution on land with emissions from sulphur dioxide falling by 80 percent since 1990,” said panel participant Louise Duprez, senior policy officer with the European Environmental Bureau (EEB). “The EU must now take similar steps to cut emissions from ships, which have toxic fumes that cause 50,000 premature deaths in Europe each year.”
NOx emissions from shipping are a concern for public health and environmental protection in Europe, particularly in coastal regions. NOx from EU shipping remains largely unregulated and, if left unabated, is set to overtake land-based NOx emissions by 2020, according to the EEA.
• Atlantic Ocean • Belgium • Cyprus
Email