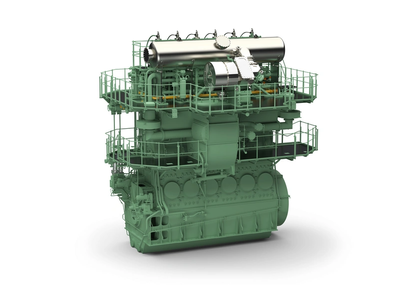 French shipping line CMA CGM has chosen WinGD’s largest, 92 cm bore, dual-fuel low-speed engine to power its series of groundbreaking box ships – presently the largest on order globally, and the first ultra large container vessels with capable of running on liquefied natural gas (LNG).
The series of nine ultra-large 22,000 TEU capacity containerships will be built at Hudong-Zhonghua Shipbuilding (Group) Co., Ltd. and Shanghai Waigaoqiao Shipbuilding Co., Ltd., and are due to enter service in 2020 on routes between Asia and Europe. The giants will be powered by 12-cylinder X92DF engines (12X92DF) from manufacturer Winterthur Gas & Diesel Ltd (WinGD), who said the engines will be rated 63,840 kW at 80 rpm, making them the most powerful gas and dual-fuel engines ever built.
For CMA CGM, Ludovic Gérard, Vice President of Owned Fleet, said, “With this move to LNG energy, CMA CGM is moving ahead for a greener shipping. We selected WinGD engines for the main propulsion on the grounds of their experience in dual-fuel engines and our positive feedback on the two-stroke Generation X engines.”
“Given the low NOx emissions of dual-fuel engines using lean burn combustion and the extremely low sulphur content of natural gas, by choosing our X-DF engines and LNG, CMA CGM is automatically complying with all existing and future emissions regulations,” said Volkmar Galke, General Manager of Sales at WinGD.
The regulations already met by the WinGD X-DF dual-fuel engines include the Iimits on NOx in Emission Control Areas (ECAs) imposed by IMO Tier III and the 0.5 percent limit on sulphur in fuel which will be introduced in 2020, as well as possible limits on particulates.
“The built-in efficiency of our lean-burn dual-fuel engines is also complemented by the favorable ratio of carbon-to-hydrogen in methane – the main constituent of natural gas – which mean that our X-DF engines are already low emitters of CO2 compared to liquid fuelled engines,” Galke said. “Our X-DF engines are thus an excellent starting point for playing a full part in achieving the 30 percent improvement in overall vessel efficiency up to 2025 specified by the IMO’s Energy Efficiency Design Index (EEDI).”
Looking at the overall Total Cost of Ownership (TCO) of the new vessels, as well as operating expenditure (OPEX), the manufacturer notes that capital expenditure (CAPEX) is reduced because the emissions levels of WinGD X-DF engines are achieved without the need to install exhaust gas after treatment systems, and by the application of the low-pressure gas admission feature of the X-DF engines, which uses less expensive, more energy-efficient gaseous fuel compression equipment compared with low-speed dual-fuel engines requiring high pressure gas injection. In addition, WinGD said its Generation X engines feature a series of designed-in measures which target increased ease-of-maintenance.
WinGD has so far received more than 75 orders for X-DF engines since their introduction to the market at the end of 2013. Besides being popular for application in LNG carriers for main propulsion, the number of orders received for cargo ships operating on LNG has increased substantially in 2017, with more than 25 engine orders received in the year to date.
To address demand for low-speed dual-fuel engines, WinGD said it has further developed for its two-stroke engines the lean burn Otto combustion process with low-pressure gas admission and micro-pilot ignition which is the global standard technology on medium speed dual-fuel engines.
WinGD’s low-pressure dual-fuel technology is offered on all Generation X engines, enabling stable combustion, high fuel efficiency and low noxious and greenhouse gas emissions typical of lean burn gas combustion. X-DF engines comply with IMO Tier III limits on NOx in gas mode and IMO Tier II in liquid fuel mode, both without EGR or SCR.
With liquid fuel consumption for pilot ignition below 1 percent of total heat release and the very low sulphur content of LNG, WinGD touts X-DF technology as a solution to the 0.5 percent global cap on sulphur in marine fuels proposed for January 1, 2020.
• CMA CGM
Email

Rolls-Royce and the Defense Production Act Title III office will invest millions of dollars to upgrade the company’s capability and capacity for U.S.

The move to autonomy on the world's waterways is undeniable, with the direction clear, the pace hazy. What is clear is the need for reliable…