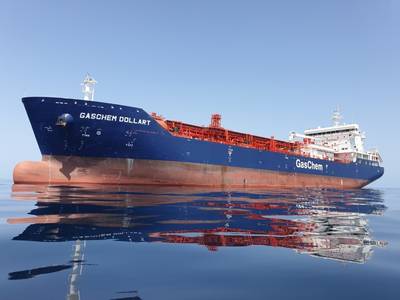 Japan's Marubeni Corporation announced it has conducted a trial voyage onboard one of its chartered ethylene carriers using a marine biofuel blend, from Vlissingen, the Netherlands to Morgan's Point, Texas, as the maritime industry continues to explore ways to decarbonize its operations.

"To the best of our knowledge, this is the first biofuel supply to an ethylene carrier in the world," the company said. "The voyage was aimed at understanding whether technical issues such as combustibility and stability arise when biofuel is used."

The FAME component of the marine biofuel blend used in this trial led to a reduction in the greenhouse gas (GHG) emissions from the voyage on a lifecycle, well-to-wake approach, Marubeni said, noting that b. Biofuel blends are particularly helpful as a "drop-in" solution available to existing fleets without the need for modifications to the engine or infrastructure in most applications.

FAME is a biofuel—more commonly known as biodiesel—largely produced from recycled used cooking oils and renewable oil sources. It has physical properties similar to those of conventional diesel and is biodegradable.

The origination and production of the FAME used in the trial is certified to the ISCC system, a multistakeholder certification scheme for biobased materials. This certification requires that sustainability criteria are followed throughout the supply chain, including the tracing of the waste feedstock from point of generation, through processing, transportation and delivery of the final biofuel.

The voyage was aimed at understanding whether technical issues such as combustibility and stability arise when biofuel is used.