Exhaust Gas Scrubbers, Not MGO, for 'Pride of America' 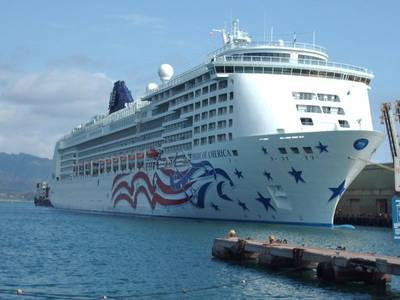 The scrubbers will be installed in March during a dry dock in Pearl Harbor Naval shipyard. They will replace the ships silencers and clean the exhaust of four, 8 MW engines, in total 32 MW,  in what the manufacturers say is the biggest marine scrubber installation in the world at this time.

Thanks to the small size of the scrubbers no valuable space for passengers or crew has to be sacrificed. The system will be a hybrid system, i.e. the vessel will be able to operate both in open loop as well as in closed loop.

“The contract is another important step towards convincing ship owners that exhaust gas cleaning systems is a feasible and less expensive alternative to running on low sulfur fuel,” says Peter Strandberg, President and CEO of Green Tech Marine."

He added that there are also other benefits with scrubber`s compared with Marine Gas Oil (MGO): reduced  particulate matter emission, soot and other particles contributing to global warming.