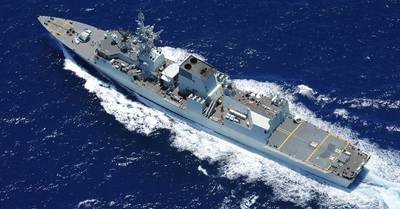 “We are now in our 15th year and fourth extension on a contract awarded by Public Services and Procurement Canada. In fact, our original five year contract began in 2001, it was renewed in 2006 for five years, in 2011 for three years, and again in 2014 for one year,” said Brien Bolsinger, GE Marine Vice President, Marine Operations. GE Marine manufactures the LM2500 gas turbines at its facility outside of Cincinnati, Ohio.

“This demonstrates that the contract provides the RCN with many benefits, most notably the impressive availability of the RCN’s LM2500 fleet over the initial 14 years of the GE contract, which averaged 99.85 percent,” Bolsinger added.

Because of the contract with GE, the RCN can dedicate resources to other equipment and maintenance tasks. The RCN has witnessed a decrease in administrative functions including procurement, inspection, technical support, and material and inventory management associated with the LM2500. The RCN also sees considerable benefits from the contract's spare LM2500 inventory control features.

Backed by GE's extensive network of global field service technicians, the RCN has access to GE services located throughout the globe, providing immediate onsite technical support 24-hours-a-day, 7-days-a-week.  Similar to the original contract, the scope of the renewed contract includes: