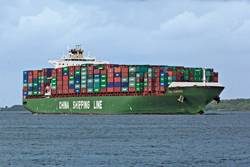 Engineers from Athens-based Danaos Shipping together with ExxonMobil, reportedly extended the overhaul interval required for a piston in a DOOSAN-MAN B&W 12-cylinder K98MC-C engine from 16,000 hours to 42,575 hours. A recent overhaul revealed that cylinder number 11 was in remarkably good condition, with a negligible liner wear rate. The achievement took place aboard the containership MV CSCL Europe, which is chartered to China Shipping Container Lines. Representatives from Danaos Shipping and ExxonMobil systematically monitored the condition of the engine throughout the overhauling process. The results were all the more significant because the containership has been slow steaming since 2009, averaging 15.6 knots with engine loads as low as 30 to 40 percent, and also operating with a reduced cylinder oil feed rate.
Since it was built in 2004, MV CSCL Europe has been lubricated with Mobilgard 570, a cylinder oil formulated by ExxonMobil to reduce piston wear and deposits, and to extend overhaul intervals in two-stroke diesel engines. The ship is equipped with MAN Diesel & Turbo’s Alpha Adaptive Cylinder Oil Control (ACC), a system that controls the dosage of cylinder oil according to the amount of sulfur entering the cylinder with the fuel. Danaos Shipping also uses ExxonMobil’s Cylinder Condition Monitoring (CCM) program to detect changes in cylinder condition so that vessel engineers can safely reduce Mobilgard 570 feed rates without increasing wear.
Ship engineers gradually extended the overhaul period on successive pistons in the 12-cylinder engine. Overhauling started at 16,000 hours and continued at extended intervals based on the good condition of the pistons, rings and liners. In cylinder number 11, the overhaul was done at 42,575 hours. Fuel sulfur level averaged approximately 2.62 percent throughout the period. Just before cylinder number 11 was overhauled, all monitoring parameters were within normal range, based on the results of scavenge air port inspections. A graph of liner wear rate over time shows that the rate in fact fell from a high of 0.02mm/1,000 hours to a rate at time of overhaul that was negligible. The overhaul revealed that even at 42,575 hours, cylinder number 11 was in remarkably good condition, suggesting that the interval could have been extended much further. Liner wear rate, piston ring wear and the ring groove clearance were all well below the thresholds identified by MAN Diesel & Turbo. No evidence of scuffing was found. Danaos Shipping used the Alpha ACC to reduce the amount of Mobilgard 570 cylinder oil from a factor of 0.34 g/k/Wh x S% to the current minimum factor of 0.2 g/k/Wh x S%, which equates to 0.6 g/KWhr (the minimum setting recommended by MAN B&W) at normal loads. According to ExxonMobil, the benefits of using Mobilgard 570 often become even more pronounced at feed rates below 0.6 g/KWhr. “We operate a high-quality fleet of 56 container ships with a reputation for reliability and cost-efficiency,” said Danaos Shipping’s Technical Manager Dimitrios Vastarouchas. “We have seen that Mobilgard 570 can help significantly extend piston overhaul intervals and for us the benefits of this technical achievement are financial and environmental.”
wwwexxonmobilmarinelubes.com
• ExxonMobil • cylinder oil
Email

Classification society ClassNK informs it has released the "Guidelines for Ships Using Alternative Fuels (Edtion 2.0)," which…