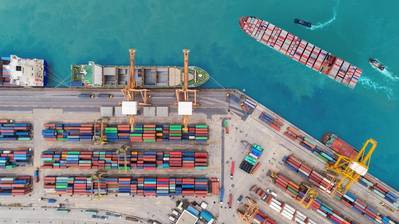 Two of the world's biggest fertilizer producers, CF Industries Holdings Inc and Yara International Asa, are seeking to cash in on the green energy transition by reconfiguring ammonia plants in the United States and Norway to produce clean energy to power ships.

The consumption of oil for transportation is one of the top contributors to global greenhouse gas emissions that cause climate change, and fertilizer producers join a growing list of companies adjusting their business models to profit from a future lower-carbon economy.

By altering the production process for ammonia normally used for fertilizer, the companies told Reuters they can produce hydrogen for fuel or a form of carbon-free ammonia used either as a carrier for hydrogen or as a marine fuel to power cargo and even cruise ships.

The shift may improve their standing with environment-minded investors as fertilizer emissions attract greater government scrutiny in North America and Europe.

But the green fuels are not yet commercial and will require significant investment to turn a profit - a reality that has the world's largest fertilizer producer, Canada's Nutrien Ltd, staying out of the space for now. Oslo-based Yara is seeking government subsidies to proceed.

Still, renewable ammonia represents a 6 billion-euro ($7.25 billion) opportunity for fertilizer producers by 2030, according to Citibank, based on 20 million tonnes of annual sales globally for clean power and shipping fuel compared with virtually none now. Global ammonia sales currently amount to 180 million tonnes.

"We absolutely could be known more for being a clean energy company than an ag supplier," CF Chief Executive Tony Will said in an interview, speaking of long-term prospects for the Illinois-based company.

'Everybody is looking for solutions'
Fertilizer plants separate hydrogen from natural gas and combine it with nitrogen taken from the air to make ammonia, which farmers inject into soil to maximize crop growth.

Production generates carbon emissions that CF says it can avoid by extracting hydrogen instead from water charged with electricity. It can then combine that hydrogen with nitrogen to make green ammonia, which the marine industry is testing as fuel.

CF is in discussions about selling green ammonia to a Japanese power consortium including Mitsubishi Corp, but buyers will break most of it down to pure hydrogen for use in transportation sectors.

"This is a market that easily can exceed what the total ammonia (fertilizer) market is," Will said. "We're going to grow into that over the next 20-25 years."

Adopting green ammonia or green hydrogen to replace crude oil-based fuel would help the International Maritime Organization (IMO) meet a target to reduce emissions, and is suited to both short- and long-haul vessels.

Methanol and liquefied natural gas (LNG) are other clean alternatives.

"Everybody is looking for solutions and I think the jury is still out," said Tore Longva, alternative fuels expert at Oslo-based maritime advisor DNV GL. "Of all the fuels, (green ammonia) is probably the one that we are slightly more optimistic on, but it's by no means a given."

Furthermore, combusting ammonia may produce nitrous oxide, a greenhouse gas, that ships would need to neutralize to prevent emissions, said Faig Abbasov, shipping director for European Federation for Transport and Environment, an umbrella group of non-governmental organizations. Fuel cells are another potential marine use for ammonia and hydrogen.

Still, Abbasov sees ammonia and hydrogen as the greenest and most practical shipping fuel alternatives, and cheaper than methanol.

Development of ammonia and hydrogen for shipping fuel holds decarbonization potential but is at the pilot stage for small vessels, while LNG and methanol are in use on oceangoing ships, an IMO spokeswoman said.

The hydrogen it will sell may have nearly 10 times the margin of ammonia fertilizer, according to CF, making the 75-year-old farm company's newest product its most profitable.

Yara is developing a green ammonia project with power company Orsted in the Netherlands and also has green projects running in Australia and Norway.

"The technology behind this is not mature enough today," he said.

Yara, which aims to cut all CO2 emissions from its 500,000 tonnes-a-year Porsgrunn ammonia plant in Norway, wants funding from the Norwegian government to switch the plant's production process to electricity by 2026.

Norway already supports hydrogen and green ammonia through a tax exemption on electricity used to produce hydrogen, Minister of Climate and Environment Sveinung Rotevatn said in an email.

"Hydrogen and hydrogen-based solutions, such as ammonia, will be important in reducing greenhouse gas emissions in the future," Rotevatn said.

Global ammonia production would need to multiply five-fold if it is to replace all oil-based shipping fuel, Abbasov said. But given the abundance of nitrogen in the air, potential supply is almost unlimited if production costs drop, he said.

"The reason (for Nutrien) to look at it is to position ourselves for when people are willing to pay," Sully said.

"The problem is we're just right at the start of development."