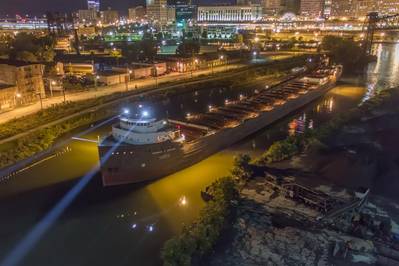 The Interlake Steamship Company’s last steamship arrives at Fraser Shipyards for repowering
The S.S. Herbert C. Jackson made its final journey as a steamship this month when it sailed into Fraser Shipyards in Superior, Wis., where it will undergo a six-month conversion to a highly automated diesel propulsion system.
As the last steam-powered ship in Interlake Steamship Company’s fleet, the Jackson is the fifth ship to undergo a major overhaul and its fourth steam-to-diesel conversion since 2006. This conversion represents the final phase of the company’s 10-year, $100 million modernization effort.
Regularly carrying almost 25,000 tons of iron ore between Marquette and Detroit, Mich., the 690-foot Jackson was powered by an aging steam turbine and two boilers, which have operated since the ship was built in 1959. Maintenance burdens and new emission requirements fueled Interlake’s decision to repower the ship.
“We have a long-term vision for this industry and made the decision 10 years ago to invest in new technology that will allow us to reduce our carbon footprint and environmental impact while increasing our reliability for our customers,” said Interlake President Mark W. Barker.
Following a significant capital investment at its Superior, Wis., shipyard, Fraser was selected by Interlake to carry out the re-engineering – a large-scale, multifaceted project.
“From a shipping company’s perspective, it’s important to have multiple facilities, such as Fraser Shipyards, that can handle complex projects like this,” Barker said. “Fraser has invested considerably in its infrastructure and its people to do a project of this size. Given the increased activity at all yards across the Great Lakes, we felt Fraser has proven its ability to do this repower.”
This is the first major repowering for Fraser since the mid-1980s, said Tom Curelli, vice president of engineering, environmental services and governmental affairs for the 125-year-old shipyard.
Curelli continued, “We have added almost 2,000 feet of new dockage and completely upgraded the electrical in the yard. In addition to our normal winter work during lay-up, we’ll have between 65 and 75 people dedicated full time to this repowering project.”
The Jackson’s new 6,250-BHP propulsion package includes a pair of MaK 6M 32E engines – reportedly the first of their kind to power a vessel on the Great Lakes –  which will give the ship enhanced propulsion capabilities and reliability. In addition, the ship will receive a twin-input, single-output Lufkin gear box with twin pto shaft generators, a Schottel controllable-pitch propeller system and Gesab exhaust gas economizers along with an auxiliary boiler. The economizers allow the ship to harness the waste heat and energy from the main engine exhaust and produce “free steam” to heat the accommodations and for heating various auxiliary systems and fuel oil services.
In total, the repowering is estimated to reduce the ship’s emissions of particulate matter by 35 percent, carbon dioxide by 57 percent and sulfur oxides (SOx) by 63 percent, according to Interlake Steamship Company.
“Not only are these engines extremely efficient, they are dual fuel capable thus could be modified to be fueled by LNG if the supply chain infrastructure for supplying LNG is built out around the Great Lakes,” Barker added. “By choosing these engines, we have the enhanced capability to further lower our environmental footprint in the future.”
After a round of sea trials, the Jackson is expected to resume her Great Lakes trade routes by late-June.
• auxiliary systems • energy • environmental services
Email

Last month a Hydrex team replaced the bow thruster of a 191-meter roro ship during the vessel’s stop in Rotterdam. Using…