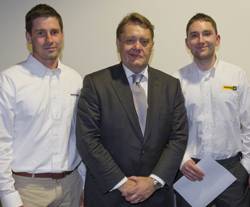 To mark this year’s National Apprentice Week (6 – 10 February 2012), Finning Power Systems (Finning), the UK’s sole supplier of Caterpillar marine engines, is announcing that places are now available for its next intake of marine apprentices.

The company is seeking young, enthusiastic talent to join its long-established marine apprenticeship scheme; a scheme that has been offering young people in the UK the opportunity to develop their engineering skills since the early 1960s. The news follows the recent, inaugural British Marine Federation (BMF) apprenticeship graduation awards, held at this year’s London Boat Show in which two Finning marine apprentices were presented with their certificates by guest of honour, John Hayes, minister of state for further education, skills and lifelong learning.

Proud recipients of the certificates, open to all BMF member companies who had apprentices completing their training in 2011, included Richard Buzza and Sam Reid from Finning, supported by their mentors, Craig Patrick, Head of Marine Operations, Jonathan Wellstead, Business Development Manager and Steve Berry, General Manager for marine. Commenting on the significance of the award, Steve Berry, said, “We are really proud of the commitment our marine apprentices have shown, both in terms of their own personal development and for the support they have given to our customers in the region; customers that rely on our professional engine service and support to keep them safely afloat.”

In 2007, the company opened its UK apprentice academy to its first 30 recruits on a three-year scheme.  The academy is a £1.5 million facility, located at the company’s headquarters in Cannock, West Midlands and purpose-built for the development of Finning apprentice training in the UK and Ireland.  In December 2010, the academy was judged as outstanding after inspection by Ofsted. Since 2007, the company has continued, year-on-year to take on further apprentices, with a further 25 new recruits each year and another 30 places planned for 2012. Last year, Finning was also formally recognised for its continued commitment to training and the growth of its apprenticeship programme, winning the Large Employer of the Year in the West Midlands award from the National Apprenticeship Service.

As well as attending the Finning academy, Finning’s marine apprentices also attend the marine skills centre in Poole, where the company partners with Paragon Skills for Industry to deliver practical, on-the-job and theoretical learning. The apprentices are trained to become marine engineers to Advanced Apprenticeship levels, making them highly-skilled in the maintenance and repair of the company’s core range of Caterpillar engines, plus giving them the opportunity to develop their skills in communication, in working effectively with others and in all aspects of health and safety.