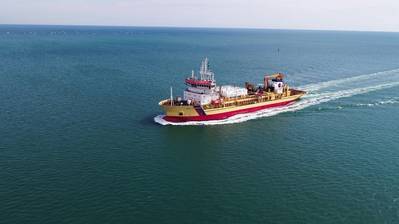 Damen Shiprepair & Conversion has signed off on the conversion of a dredger to dual-fuel operation on liquefied natural gas (LNG) and marine gas oil (MGO), and which is powered by MAN 35/44DF engines.

The conversion of the ‘Samuel de Champlain’ is the first of its kind in Europe and is part of an EU-supported initiative to promote LNG propulsion in short-sea vessels operating along the European Atlantic coast.

The 117m, 8,500m³ trailing suction hopper dredger is owned by Rouen-based GIE Dragages-Ports and operated by Port of Nantes-Saint-Nazaire. Its conversion involved the replacement of its diesel-electric MGO-burning propulsion system with 3 × MAN 6L35/44DF dual-fuel models, as well as the installation of onboard LNG storage facilities.

The Samuel de Champlain was built in 2002 and is the largest in the GIE Dragages-Ports fleet. Based in the Port of Nantes-Saint-Nazaire, the vessel operates between the Loire and Seine estuaries.

The MAN 35/44DF engine
Damen and Dragages-Ports selected an MAN 35/44DF propulsion solution on account of its outstanding performance criteria and increased environmental friendliness. Decisive criteria for a 35/44DF solution include:

Project background
The conversion project was granted by the European Commission’s Innovation and Networks Executive Agency (INEA) via its Connecting Europe Facility program. To qualify for funding, GIE Dragages-Ports formed a consortium to promote the use of LNG by small-scale vessels on the Atlantic coasts of Spain and France and up into the English Channel – in the process, kickstarting the development of an LNG bunkering network.

The conversion of the Samuel de Champlain intends to demonstrate the feasibility of using LNG as a fuel on smaller vessels, and allows GIE Dragages-Ports to optimize costs by reducing fuel bills and engine maintenance, while simultaneously reducing CO2, NOx and particulate matter emissions.