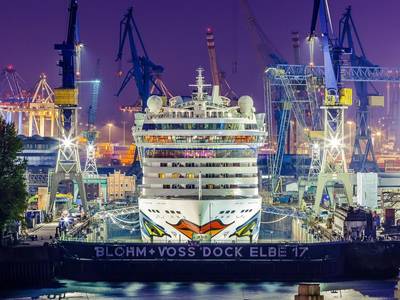 AIDAluna left the Blohm + Voss shipyard in Hamburg yesterday after extensive maintenance work was carried out from April 26 to May 5, 2014. Work on the cruise ship included among others the installation of the first elements of a comprehensive filter system with which AIDA Cruises is gradually fitting out its fleet.

The system for the treatment of exhaust gas emissions, which was developed within the Carnival Group, uses a new technology built in a compact form making it possible to technically integrate all of the main cleaning stages for the first time. After its stay at the shipyard, AIDAluna is now fitted with the first element of the system – a so-called “scrubber” – that reduces sulfur oxide emissions by around 90 percent. Further elements of the exhaust gas treatment system will be installed in due course.

Apart from this, scheduled class and maintenance work was carried out on AIDAluna, including on the stabilizers, steering gear, the ship’s body and the machinery. The deck floorings, staterooms and public areas are also restored to new glory after the visit to the shipyard: the deck floorings were replaced – including more than 2,000 m² of carpeting – upholstery was cleaned, and painting and leather treatment work carried out.

Another new feature is the installation of a face recognition system at the photo shop. When guests scan in their board cards, they can now see all photos of themselves on a monitor, and individually select which ones they wish to print as mementoes. Thanks to digitalization, AIDA will reduce its consumption of photo paper and printing chemicals by around 50 percent, making yet another contribution to environmental conservation. In addition, the photo shop’s printing technology has been upgraded, and the display cabinets refurbished.

AIDAluna is the sixth ship in the AIDA fleet and has been in service since 2009. On Friday, May 9, 2014, AIDAluna will dock at the Cruise Center Hafencity West from 8 a.m. – 8 p.m., where it will be a guest at the Hamburg Port anniversary celebration. Afterwards it will set sail on a short four-day cruise to Amsterdam and London.