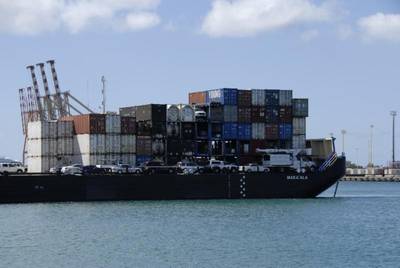 Foss Maritime and one of America's most prestigious national research laboratories are joining in a project aimed at producing cleaner air, less costly fuel and a healthier environment.

Seattle-based Foss and its Hawaiian subsidiary, Young Brothers Ltd., are partnering with hydrogen researchers at Sandia National Laboratory. They are building a portable, self-contained hydrogen fuel cell for testing at the Port of Honolulu beginning in 2015 for six months. The prototype can be installed on barges, provide power to refrigerated containers on the dock or be transported to wherever it is needed to generate electricity.

"The hydrogen fuel cell is exciting new technology," said Paul Stevens, CEO and President of Foss Maritime. "It underscores once again our company's willingness to innovate and find solutions to decrease emissions from our operations. The entire maritime industry stands to benefit from the work we'll be doing with Sandia's hydrogen researchers."

"No one has ever built this kind of custom unit for this purpose," said Sandia's Joe Pratt, who led the previous study and serves as project manager. The unit, he said, will fit inside a 20-foot shipping container and consists of four 30-kilowatt fuel cells, a hydrogen storage system and power conversion equipment.

The completed system will be deployed by Young Brothers, Ltd., which ships goods throughout the Hawaiian Islands. The unit is undergoing detailed engineering and design through mid-2014 and, after construction and an additional month of training for Young Brothers operators, will be operational in a six-month test phase in early 2015.

Glenn Hong, Young Brothers President, welcomed the partnership with Sandia: "Environmental stewardship is an important aspect of Young Brothers' business, so we're pleased to be part of this clean-energy initiative."

The Hawaii project is jointly sponsored by the U.S. Department of Energy's Office of Energy Efficiency and Renewable Energy (EERE) and by the U.S. Department of Transportation's Maritime Administration (MARAD). Two other companies are involved in the project: Hydrogenics Corp. will build the prototype unit and provide fuel cells; and, Hawaii Natural Energy Institute will provide assistance with the availability of hydrogen.

Armed with optimistic results from the 2013 study of various west coast ports, Sandia followed up with an analysis that looked in more detail at Young Brother's shipping operations. Like many operators, the company often uses diesel generators to provide auxiliary power.

"We compared the efficiencies of their diesel engines versus fuel cells, studied hydrogen costs and tried to pinpoint the cost savings and reductions in emissions that would be realized if they were to convert to a fuel cell-centered operation," said Pratt.

Following the six-month deployment of the fuel cell system, Pratt said the project team will carefully analyze the project's successes and challenges. "Lessons learned" might range from key technical issues related to the system itself, or operational findings that won't be known until the deployment is completed.

Pratt said the best-case scenario would be continuous, reliable operation of the prototype fuel cell system at the pier and on a barge, an operation which would save Young Brothers money and lower emissions.

The long range goal, he said, is to develop a commercial product that can be widely used at ports worldwide. Hydrogenics Corp., he pointed out, sees a strong market need and desire for a "fuel cell in a box" product, not only at ports but also for other applications such as providing power to users not connected to an electric grid.

"All of the project partners believe in the commercial viability of this work and believe this will become much bigger than a one-off deployment," Pratt said.