Foss' Retrofitted Hybrid Tug to be on Display 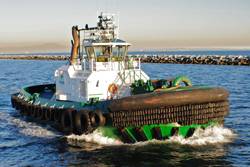 
Who: Foss' second hybrid tug, the retrofitted Campbell Foss, will be open to the media for the first time.

What:     The Campbell Foss is sister to the Carolyn Dorothy, which has been bringing cleaner air and fuel efficiency to southern California ports since its 2010 arrival in Los Angeles and Long Beach.

Why:       Foss Maritime Company is nearing completion of its second hybrid-this time a retrofitted tug called the Campbell Foss-in partnership with the southern California ports of Los Angeles and Long Beach. "Hybrid technology is already proving itself," says Richard Cameron, head of environmental planning for the Port of Long Beach, "and we're anxious to see improvements in this second generation vessel." The Foss/Los Angeles-Long Beach partnership's goal is to achieve significant reductions in pollution emissions and fuel efficiency while preserving operational capabilities.

Gary Faber, Foss' president and COO, says, "At Foss, we have a 'zero trace' corporate goal. Our hybrid technology is an important part of that strategy. Think of all the world's ports - and all the harbor tugs working in them. What an opportunity we have to bring cleaner air and greater fuel efficiency."


Directions to the Foss Shipyard in Rainier Oregon

• From Portland, Oregon take Highway 30 West toward St. Helens
• Pass through St. Helens on 30 West, and exit at the city of Rainier
• Turn right on 5th Street
• Turn right on A Street
• Follow to the end (traveling along railroad tracks)
• Shipyard at the end of A Street