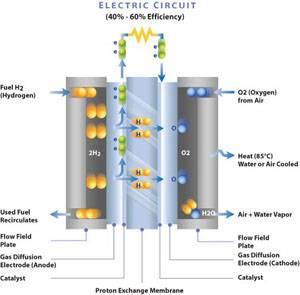 Wall Street has been quiet lately, with volume often below average and gains mostly slight, but fuel-cell makers have emerged as one of 2014's most dynamic sectors, making huge swings on massive volume.

This week has been typical. The fuel-cell group's most prominent players have posted gains that vastly outpaced the broader market on some of the highest volume among equities.

Ballard Power Systems Inc gave the sector a catalyst on Thursday, when the Canadian company announced an agreement with Azure Hydrogen to provide telecom backup power systems for the Chinese market. More than 13.8 million of its U.S.-listed shares exchanged hands as a result, swinging from a gain of nearly 9 percent to end down more than 3 percent. The stock popped 5.2 percent on Friday, again on heavy volume.

That kind of action is nothing new for the group. Plug Power Inc has attracted volume of about 4.3 billion shares so far in 2014, compared with roughly 1 billion throughout 2013.

"This is purely a momentum play, with a herd of short-term players rotating in because everything else in the market looks expensive," said Dennis Dick, a Las Vegas-based proprietary trader at Bright Trading LLC, who closed a position in Plug on Thursday. "I don't like them long-term, but investors combing the ditches for value could kick-start further gains."

While the group is small - none of the prominent players, which includes FuelCell Energy, have a market cap over $1 billion - interest in the sector has surged since early 2013, when Plug Power announced an initial public offering.

"It went from running out of money and doing little business to having a strong balance sheet and enough cash to invest and expand," said Rob Stone, an analyst who covers the sector at Cowen & Co in Boston and has a $6 price target on Plug. The situation is "as different as night and day" now.

Plug, which trades at $4.78, is one of Cowen's clients, and the brokerage has received compensation from the company.

The price of Plug's stock has jumped more than 900 percent since the start of 2013, though that follows a five-year streak of steep annual declines.

Ballard's stock price has nearly tripled this year, while Fuel Cell shares are up 75 percent.

The move hasn't been missed by short sellers. In March, prominent short-selling firm Citron Research wrote that Plug's fair value was 50 cents a share, causing a one-day plunge of 41 percent in the stock.

At the end of May, short interest represented 21 percent of Plug's outstanding shares, according to Nasdaq, up from 6.8 percent at the end of 2013. FuelCell and Ballard also drew increased short interest, though of a smaller magnitude.

"The short thesis on these is that in the past, they've had optimistic outlooks that weren't achieved, and they expect that to happen again," Stone said. "However, it looks like the issues in the past have been cured."

In its June quarter, Ballard is expected to post double-digit growth in its top and bottom lines, while Plug Power is projected to nearly double its revenue, according to Thomson Reuters data.