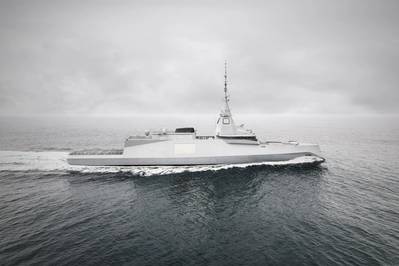 Naval Group has started to select the first equipment suppliers for the five future intermediate-size frigates (FTI) intended for the French Ministry of Defense.
In the framework of the execution of the contract awarded by the French Defence Procurement Agency in April 2017, Naval Group initiated its process of selecting the program's industrial suppliers for the five future intermediate-size frigates, the first of which will be delivered to the French Navy in 2023.
"We expect a lot from our suppliers," said Frédéric Massa, Director of Naval Group Purchasing. "The success of the program is dependent on them fulfilling their commitments: timely delivery of input data and equipment for which they are responsible, with the expected quality level. We therefore selected them for their capacity to deliver on this strategic program for France."
To date, the main suppliers selected are:
-- Axima, for heating, ventilation and air conditioning (HVAC) systems;
-- CNIM, for sonar hatches and torpedo hatches;
-- Ixblue for navigation units and their computers;
-- Leonardo for 76 mm medium calibre artillery systems;
-- MBDA for integration and services relating to missile-firing installations;
-- MTU, one of the world's leading manufacturers of large diesel engines;
-- Safran Electronics & Defense for the optronic identification system incorporating the very long range of the PASEO XLR (eXtra Long Range) sight;
-- Thales, for the sonar suite, the electronic warfare suite, the IFF (Identification, Friend or Foe) and the communications system.
The French version of the Belh@rra, a world-class frigate of an approximate displacement of 4,000 tonnes intended for anti-submarine warfare, is designed to respond to the various French national needs. It will be endowed with extended self-defense and special forces projection capacities. Furthermore, it will integrate the new Thales SEA FIRE four flat antenna radar and will be equipped with reconfigurable firing installations for Aster 30 and Exocet missiles from MBDA.
• communications system • equipment suppliers • France
Email

The final vessel in 15-ship series enters service for Yamal LNG project ahead of schedule.Yakov Gakkel, owned by joint venture…

Volvo Penta to power three hybrid and hybrid-ready ferries currently being built at GS Marine Production AS. GS Marine is…