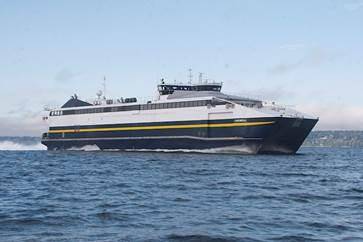 Over the past several months, FVF Chenega, a high-speed car ferry in the Alaska Marine Highway System (AMHS) fleet, was repowered with four new MTU Series 4000 engines. In April, the project was completed with two days of successful sea trials in Seattle.

Engineers from MTU America Inc., a Rolls-Royce Power Systems company, along with members of the Chenega’s crew and other AMHS representatives ran the ship through a series of extensive performance and endurance tests on Puget Sound. The results of the tests were positive, according to the crew and the engineering team.

“The engines performed perfectly, as we expected due to the extensive system testing conducted by the MTU, Foss, and AMHS teams during the construction phase of the project,” said Andrew Packer, senior manager, Marine Application Engineering, MTU America. “We were able to constantly monitor the performance of each engine as it responded to the FVF Chenega’s control system during sea trials. The success of this project would not have been possible without the team at Foss, our distributor Pacific Power Group, and all of our partners who helped us along the way.”

“The State of Alaska is pleased to see the repower of the Chenega complete and on time,” said Mike Neussl, Alaska Department of Transportation and Public Facilities Deputy Commissioner. “The new engines will help the vessel provide safe and reliable service to Alaska’s residents and visitors for many more years.”

The repower project was performed at Foss Seattle Shipyard. Engineers from MTU America with support from Pacific Power Group managed the installation and testing of the four new 20V 4000 M73L diesel engines, which produce 3,600 kW (4830 bhp) each. Combined with Rolls-Royce water jets, the 235 ft. (72 m) long ship is capable of speeds up to 40 knots while carrying 250 people and 40 vehicles.

Last year, a similar project was completed aboard the FVF Fairweather, the sister vessel of the FVF Chenega in the AMHS fleet.