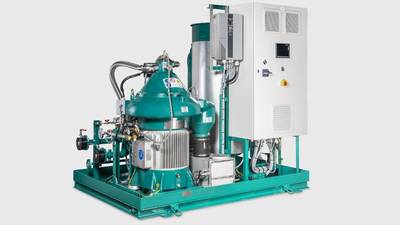 German technology group GEA is supporting the compatriot manufacturer of marine engines MAN with new separator in the development of a game changer.

With the help of a system partnership, two Game Changers in their respective areas develop into a large, joint solution, said a press release.

With the installation of the new GEA marine Separator 50 on the engine test bench in Augsburg, GEA supports its customer MAN in the development of its high-performance diesel engine 45/60CR.

The new diesel engine was designed by MAN engineers to set a new standard in propulsion technology, for example for cruise ships, ro-pax ships (combi-carriers transporting cargo and passengers), ro-ro ships (ships on which the cargo travels on board passenger cars, trucks or trains) or dredgers.

A planned 20V model would accordingly have a peak output of 26MW. The new high-performance diesel engine has earned the term Game Changer not only because of its performance. The two-stage turbocharging, which results in a previously unattainable specific fuel consumption, also contributes to this. Furthermore, the new machine reduces operating costs and improves the overall environmental balance.

In addition to its high energy efficiency, the integrated direct drive of the GEA marine Separator offers best and certified flow rates. The new GEA technology is compact and space saving. Due to its design, it provides fast, direct access to all parts. These are all features that are not only important on ships that require every centimeter of space, but are also advantages on an engine test bench.

The knowledge gained through operation on the engine test bench, including all data, is decisive for the subsequent use of MAN high-performance diesel engines. Not only can the future use be simulated here, but the many advantages of the drive can also be demonstrated.

The implementation of the GEA marine Separator on the test bench marks the beginning of a new chapter in the decades of cooperation between MAN Energy Solutions and GEA.