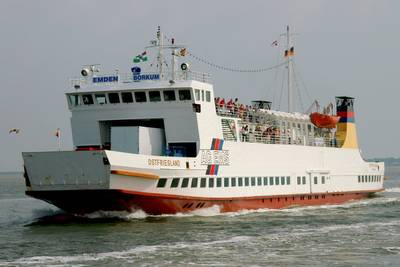 The project entails converting the m/v Ostfriesland, a car and passenger ferry owned by Aktien-Gesellschaft "EMS", so that it can utilise liquefied natural gas (LNG) as fuel. The vessel sails between Emden and Borkum Island on the Lower Saxon Wadden Sea National Park, an ecologically sensitive UNESCO World Heritage listed area in the southeastern part of the North Sea, and the retrofit will significantly reduce the ship's environmental impact.

The vessel will be fitted with two 6-cylinder Wärtsilä 20DF dual-fuel generating sets and a Wärtsilä LNGPac. The dual-fuel engines will run primarily on LNG as the main fuel, but have the capacity to switch to conventional liquid fuels if necessary. The LNGPac, innovated and developed by Wärtsilä, comprises onboard liquid natural gas bunkering, storage tanks, and handling equipment with related safety and automation systems. The scope of supply also includes Wärtsilä's patented Cold Recovery System, which utilises the latent heat of LNG in air conditioning systems, thus reducing the amount of electricity consumed in cooling compressors. Significant operational savings and an increase in overall vessel efficiency are the result.

The Wärtsilä contract was signed in April 2013. The retrofitting will be carried out during the second quarter of 2014 and is expected to be completed in about seven weeks.

"It is of the utmost importance for us to operate the 'Ostfriesland' in the most ecologically friendly manner possible, with low exhaust emissions, perfect manoeuvrability, and high reliability. Thanks to Wärtsilä's dual-fuel technology with its built-in redundancy, the vessel will be able to operate without restrictions in the SECA and NECA sulphur and nitrogen controlled areas. It was very important for us to select a reliable and experienced partner, especially as we will begin operating gas-electric driven passenger ferries," says Dr. Bernhard Brons, Member of the Board of AG "EMS".

"The owners of this vessel, AG "EMS", take environmental issues very seriously and since this vessel is operating within the ecologically sensitive Wadden Sea, emissions need to be minimised. Our dual-fuel engine technology makes this possible through the use of LNG as fuel. The high efficiency of this technology also lowers fuel consumption and offers extremely good reliability, both of which are important to any ferry operator," says Mr Aaron Bresnahan, Vice President Sales, Wärtsilä Ship Power.