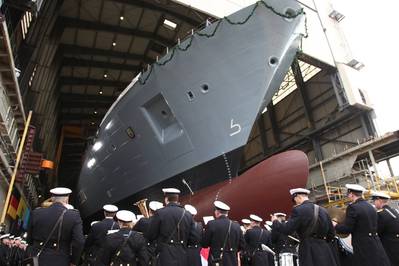 The German Navy's third F125-class frigate Sachsen-Anhalt was christened in March during a ceremony held at ThyssenKrupp Marine Systems shipyard in Hamburg.

Dr. Gabriele Haseloff, wife of the premier of the state of Saxony-Anhalt after which the frigate has been named, performed the christening ceremony in the presence of representatives from government, the German Navy and the companies involved.

The ARGE F125 consortium which was awarded the contract to build four F125 class ships for the German Navy in 2007 comprises ThyssenKrupp Marine Systems as the lead company and Fr. Lürssen Werft in Bremen. The pre-fitted bow sections are being manufactured at the Fr. Lürssen Werft shipyards in Bremen and Wolgast. Construction of the stern sections, the joining of the two sections and further fitting out is being carried out at Blohm+Voss Shipyards in Hamburg.

The new F125-class frigates replace the German Navy's eight Bremen-class frigates. The first two frigates of the four vessel series, Baden-Württemberg and Nordrhein-Westfalen, were christened in December 2013 and April 2015, respectively.

Sachsen-Anhalt is scheduled to be handed over to the German defense procurement agency BAAINBw in early 2019. Commissioning and in-port trials of the first F125 frigate, the Baden-Württemberg, have now advanced to the stage where sea trials can commence as planned in spring this year. Handover of the Baden-Württemberg to the BAAINBw is scheduled for mid-2017. The contract for the F125 program is worth around two billion euros in total.