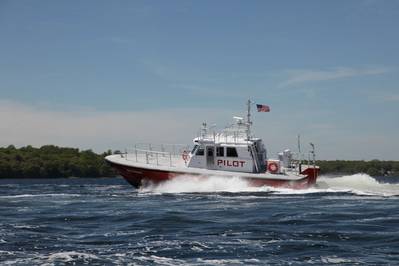 The Virginia Pilot Association has taken delivery of a Chesapeake Class MK II launch from Gladding-Hearn Shipbuilding, its ninth pilot boat built by the Somerset, Mass., shipyard since 1983.

The vessel’s wheelhouse is well aft of amidships on a flush deck to improve comfort and provide for a larger foredeck. The aft deck has a large engine removal hatch made possible by the compact Volvo Penta IPS system. The wheelhouse is outfitted with five NorSap shock-mitigating reclining seats, a 12kW Alaska Diesel generator for electricity and a 16,000 Btu reverse-cycle HVAC unit. A second 16,000 Btu HVAC unit is installed in the forecastle, along with a settee berth, enclosed head, small galley and lockers.

Outside of the wheelhouse are heated side-decks and handrails to prevent ice accumulation. Ladders on the sides of the wheelhouse lead to hinged boarding platforms on the roof. A control station is located at the transom, along with a winch-operated rotating davit system over a recessed platform for pilot rescue operations.

Since the Chesapeake Class pilot boat was introduced by Gladding-Hearn in 2003, 22 boats have been delivered to 11 pilot associations throughout the U.S.

In 2018, MarineLink rode aboard Hampton Roads, another Chesapeake Class MK II launch built by Gladding-Hearn for the Virginia Pilot Association. See the vessel in action below.