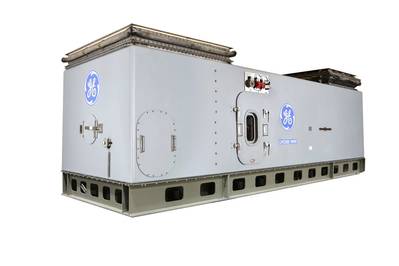 There's an “electrification of the seas” happening for navies around the world.

Whether it's to achieve greater military capabilities, operational economics and efficiencies or to be better stewards of the environment.
There's a trend moving from direct mechanical drives towards more flexible electrical propulsion systems. Ships can still have the same propellers and engines, but they now have a much more flexible power system architecture that benefits design, operations and sustainment.
“With an electric propulsion system, we can connect to the same gas turbine or diesel.  Any prime mover can run any load, whether it's for propulsion, the ship’s electric power distribution system, or sensors or weapons,” said George Awiszus, director of military marine marketing and business development with GE’s Marine Solutions in Cincinnati, Ohio.

For naval applications, this trend favors larger ships as opposed to corvettes or patrol boats, because destroyers and aircraft carriers have bigger electrical loads and the need for immediate power to apply to directed energy weapons, or electro-magnetic catapults and weapons elevators.
Ships such as the USS Zumwalt (DDG 1000) class of guided missile destroyers and the Royal Navy’s HMS Queen Elizabeth class of aircraft carriers are examples of ships using gas turbines and integrated electric propulsion instead of dedicated propulsion prime movers coupled directly to the shaft with large reduction gears.

According to Nick Smith, executive technology leader with GE Power Conversion in Rugby, UK, it's the electrical grid in the middle that offers the flexibility.  “You can change prime movers as the technology advances, upgrade sensors or add new weapons.  Once you have established the grid in the center, you can innovate at both ends.”

“We can adapt all of the current prime movers and energy sources to the grid.  Today we can install an LM-2500 gas turbine on the grid. But in the future, when we have fuel cells and other green technologies, which will be electric, and they will connect. You don’t have to know what that future technology is. You just have to know that it will have an electrical interface,” said Smith.

Another trend is static energy storage, like batteries and capacitors, that deliver improved power density.

“Even in a combat situation at high speed, power can be diverted momentarily from propulsion to charge up energy weapons such as lasers, without slowing down,” Smith said.  “We can have a battery bank with a capacitor bank on top for short-term pulses, such as launching a plane from an EMALS catapult.  If you've got electric grid and lose a prime mover, the batteries can provide power to the grid for a while until you can restart an engine.”

Awiszus said GE’s new composite enclosure module for the LM 2500 provides about 6,000 lbs. in weight savings per gas turbine package. “It’s half the weight of the steel enclosures.  It’s cooler to the touch—25 to 50 degrees cooler--and its quieter.  So it’s better for the Sailors in the engine room, and reduces the ships acoustic signature providing a tactical advantage.”

Awiszus said the future will bring simpler power systems.  “We’ll see more power-dense solutions with fewer moving parts.  Instead of 20 parts, there will be 10 parts, or just five.  Our ultimate goal is a single machine with nothing else--no converters, dynamic braking, resistors, or filters.  The machine will directly connect to the grid--nothing else needed.”

Awiszus said electrification offers the maximum flexibility for any of the future generating, weapons or sensor technologies that will come along.   “It really does give you ‘future proofing.’ You don't have to worry about what it might look like.  There could be 50 things in the pipeline, and only five might make it through to the final stage, but they'll all be electric.”