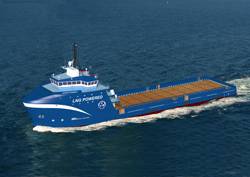 In addition to being powered by cleaner burning natural gas, the vessels will achieve “ENVIRO+, Green Passport” Certification by the American Bureau of Shipping.  The requirements for this certification include, among others, that the vessels be continuously manned with a certified Environmental Officer, be completely constructed with certified environmentally friendly materials, and have advanced alarms for fuel tanks and containment systems.  Along with Harvey Gulf’s other vessels under construction, these will be the first OSV’s to achieve this certification, making them the most environmental friendly OSV’s in Gulf of Mexico.

Harvey Gulf CEO Shane J. Guidry announced the signing: “Harvey Gulf’s decision to become the leader in “Clean” Gulf of Mexico operations has been enthusiastically accepted by oil company executives and was the impetus for adding two additional LNG Dual Fuel vessels to the fleet.  These vessels, like their two sisterships, will meet the highest emissions standards that exist today and even higher standards that haven’t been created yet.  We recognize the strong stance on environmental protection by the administration in the wake of the oil spill and are doing our part to respond to it and provide our customers support for their environmental commitments.  John Dane III, Trinity’s President and CEO, stated “This follow on order is a significant milestone for our shipyard and will increase employment by hundreds at its peak during the next 36 months.”