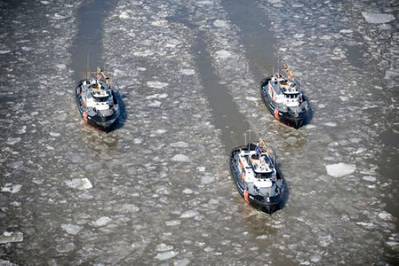 To celebrate their years of service, the 65-foot harbor tugs steamed together north on the Hudson River, beginning at the Poughkeepsie Walkway over the Hudson to Kingston, N.Y.

“It is a great honor for the crew and I to be a part of and continue Coast Guard Cutter Hawser’s great heritage in, which she and her past crews have provided 50 years of service to the Port of New York, New Jersey and Hudson River communities,” said Senior Chief Petty Officer Lawrence Dean, Officer-In-Charge of the Hawser.

The three tugs of the Capstan class were constructed at New Bern, N.C., and commissioned in 1963. With steel hulls, they replaced the wooden hulled 64-foot tugs. The Hawser and Line were stationed in Bayonne, N.J., and the Wire was stationed in Saugerties, where they have served ever since. An officer-in-charge, typically a Chief or Senior Chief Petty Officer, and four members crew the tugs.

With the primary mission of ice breaking, they break ice in New York Harbor and on the Hudson River helping to facilitate the shipping of vital supplies such as home heating oil. The tug crews have also played significant roles in responding to major maritime incidents such as the evacuation of Lower Manhattan following the 9/11 attacks. Every day, the tug crews perform the wide range of Coast Guard missions of search and rescue, national security and environmental response as integral members of the local maritime community.