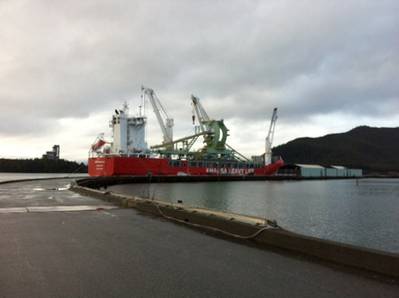 Prince Rupert Port Authority, BC, saw the safe arrival of equipment integral to its coal export operations aboard 'HHL Macao'.

The stacker/reclaimer unit, for delivery to Ridley Terminals Inc. is considered important for the planned expansion of coal export operations.

The successful arrival of the vessel and subsequent movement of the stacker/reclaimer components required a wide-ranging team effort. The Prince Rupert Port Authority collaborated with ship's agent Peter Riley of G.W. Nickerson, experienced pilots of the BC Coast Pilots, tug operators from SMIT Marine, and members of ILWU Local 505.

"Today's complex operation demonstrated the value of a well-coordinated port community," said Gary Paulson, Vice-President of Operations and Harbour Master for the Prince Rupert Port Authority. "By working together, our partners in the marine industry ensured the efficient arrival of an enormous and valuable piece of infrastructure."

"The transit of this vessel through Porpoise Channel and into the harbour means that this part of our waterfront is coming back to life," said Paulson, who oversaw the delivery from aboard the Port Authority's patrol vessel. "The significant plans for development along the Ridley Island foreshore will result in increased marine traffic. We have confidence that vessels like the Macao can navigate these waters safely."

The Pacific Pilotage Authority and the BC Coast Pilots also used today's arrival as a training opportunity to re-familiarize marine pilots with the entrance to Porpoise Harbour. Five pilots were aboard the Macao as it made its approach into Prince Rupert.

The Macao berthed in Porpoise Harbour, on the east side of the Ridley Island industrial site, where the equipment will be transferred from the vessel to barges by Wainwright Marine. The ship was secured at the dock of the former Skeena Cellulose pulp mill.