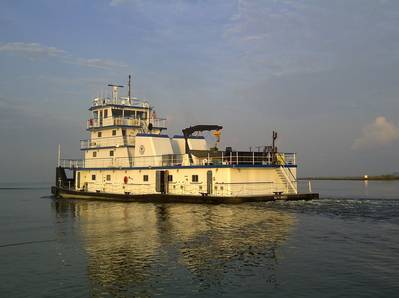 “This boat is a true workhorse,” said Ben Forrest, Project Manager for the M/V Brees. “There were some challenges that we had to overcome during production because of the larger propulsion package but our guys really stepped up.  The boat ran great during sea trials and will be going to work immediately, which is a reflection of the superior skill of our craftsmen.”  Named after Superbowl XLIV Most Valuable Player, Drew Brees, the M/V Brees boasts nearly 5000 HP making it one of the most powerful towboats of its size.  Like its sister ships, the M/V Brees was designed by John Gilbert and is 120’ long by 35’ wide with a 10’ draft. The towboat is four-decked and is outfitted for service in areas restricted to overhead clearances and draft limitations.  She is powered by two 2,450 hp C280 Caterpillar engines coupled to Lufkin reduction gears.  Ten inch shafts turn five-blade, stainless steel wheels manufactured by Sound Propeller Services, Inc. that are mounted in kort nozzles for maximum efficiency.  Auxiliary power is supplied by two 175 kw Caterpillar C9 generators.

Not only is the M/V Brees very powerful, it is also very comfortable.  During both design and construction, focus on crew comfort was paramount.  “We paid a lot of attention during the design phase to coming up with the most cost effective ways to reduce noise and vibration,” said Jeff Brumfield, New Construction Manager for FMT.  “We’re quite proud of our new fleet and Horizon has given us a smooth running boat in the M/V Brees.”

Having built a reputation as a high quality shipbuilder, uncompromising customer service is at the heart of Horizon’s business philosophy.  Although Horizon has performed several repair projects and is also building towboats for the US Army Corps of Engineers, Florida Marine Transporters are their primary customer.  “Our relationship with FMT is at the center of our new build strategy,” said Travis Short, Horizon’s President.  “During the economic downturn of the past few years our relationship with FMT grew very strong and we intend to make it even stronger.”

Horizon Shipbuilding, Inc. (Horizon) is a “best value” shipyard specializing in the design and construction of ships, boats, and barges up to 300' in length and 1500 tons launch weight for domestic and international clients. Its proven customer base includes tug and barge operators, the offshore oil industry, cruise and diving industry, and specialized craft for the United States and foreign governments. Additional information can be found at www.horizonshipbuilding.com.