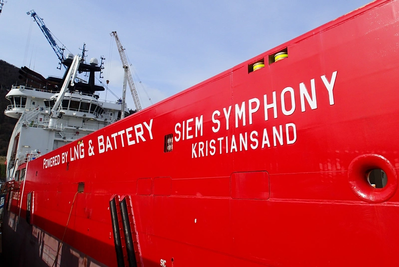 Siem Offshore said one of its dual fuel platform supply vessels (PSV) has been upgraded with a hybrid battery package, in line with the company’s goals to reduce its environmental footprint.

The installation aboard the 2014-built VS 4411 DF Siem Symphony was conducted at Westcon’s yard on the Norwegian west coast during the second quarter, and the vessel has been assigned the Battery Power notation from DNV. Prior to the conversion, the 5,500-dwt vessel was already equipped to run on marine diesel and liquefied natural gas (LNG).

"We are highly satisfied to see the initial results showing an immediate effect on reducing the vessel’s fuel consumption, subsequently contributing to Lundin Energy Norway’s commitment to minimizing the impact of its marine activities through managing the greenest term contract PSV fleet in the world," Siem Offshore said.