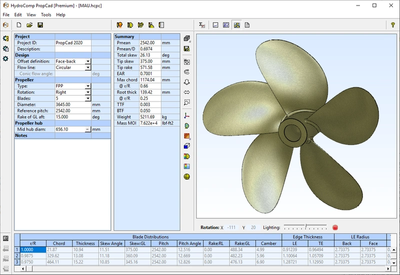 All HydroComp 2020 products have been upgraded with a new internal code-and-control set. This has increased the speed and stability of the program across existing Window’s platforms. These changes are largely behind the scenes, but users will notice some visual changes in PropCad and HydroComp’s other programs.

PropCad 2020 includes the latest updates to the Classification Society Rules, which determine blade thickness requirements. The American Bureau of Shipping (ABS) has introduced a consolidated rule set – the Marine Vessel Rules – which supersedes many of the previous rule sets. The Indian Registry of Shipping (IRS) Ice Class HA rule set is now included for fixed pitch and controllable pitch propellers.

Many of the existing propeller materials have been adjusted to improve the visualization of curvature and edge details on the blade surface. Additional rendering options have been introduced, including “hard edges” and texture options. The 3D render loops have been optimized for increased speed and stability, particularly for older graphics cards.