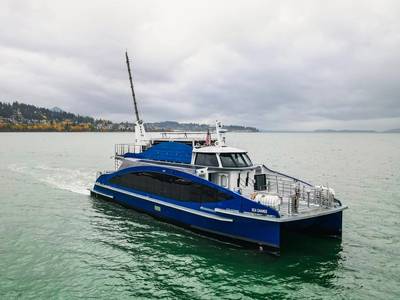 Hydrogen is everywhere. You know that from high school chemistry. And you also know it from Marine News’ almost daily updates about H powered vessel projects around the world.

As a fuel that could potentially replace fossil fuels, H is in the spotlight. Perhaps the brightest spotlight, at least in the U.S., is within the Department of Energy’s “Energy Earthshots” initiative.

R&D on H was the first such Earthshot announced last year. DOE wants the “Hydrogen Shot” program to “accelerate innovations and spur demand of clean hydrogen by reducing the cost by 80%.”

Note the reference to “clean” hydrogen. Currently, U.S. industry produces several million cubic feet of H daily, used for industrial applications such as refining, treating metals and food processing. H is produced using high-temperature steam (“steam reforming”) and via electrolysis – splitting water into H and oxygen. Each process is energy intensive and expensive, usually fueled by natural gas. The conundrum has always been: why use H as fuel when natural gas is so cheap? The carbon factor forces a different perspective. If clean H could be generated using renewable energy, there could result an almost limitless supply of a fuel that, according to many experts, shares characteristics with natural gas, making H a relatively familiar replacement.

Hydrogen Shot seeks to reduce the cost of clean hydrogen by 80% to $1 per 1 kilogram in 1 decade ("1 1 1"). To get traction on this, in February, DOE published a request for information on “clean hydrogen manufacturing, recycling and electrolysis technology research, development and demonstration (RD&D)” and a second request pertaining to establishing a number of R&D “Hydrogen Hubs” at various research facilities in the US. One goal is to locate the R&D Hubs in the same city or region as new H production. Then, R&D and production could work together to get H mainstreamed even faster.

The optimism about H, of course, has to be tempered with difficult realities, very difficult realities. Hydrogen is volatile, highly flammable and explosive. It’s expensive to produce. Storage and transport are difficult, requiring even more energy to compress the gas into a liquid and then store it at low temperatures. Trying to overcome these challenges involves a mental and physical wrestling match with the very foundations of chemistry and physics—and economics.

Regulators, not to mention a concerned citizenry, will need to take a deep breath about proposals to transport and store hydrogen. Maybe production could be kept remote, but at some point, a fuel has to move to where it’s needed: ports, holding tanks, rail yards, transfer vessels, truck depots, airports. Acceptable risk will be difficult to document.

Some lessons learned
Reports about new H projects are important, of course, but there are also quite a few H projects that have concluded. Do the lessons from those projects confirm the kind of expectant promise inherent in a national initiative like Hydrogen Shot? Here’s a closer look at two such H projects with a maritime focus. 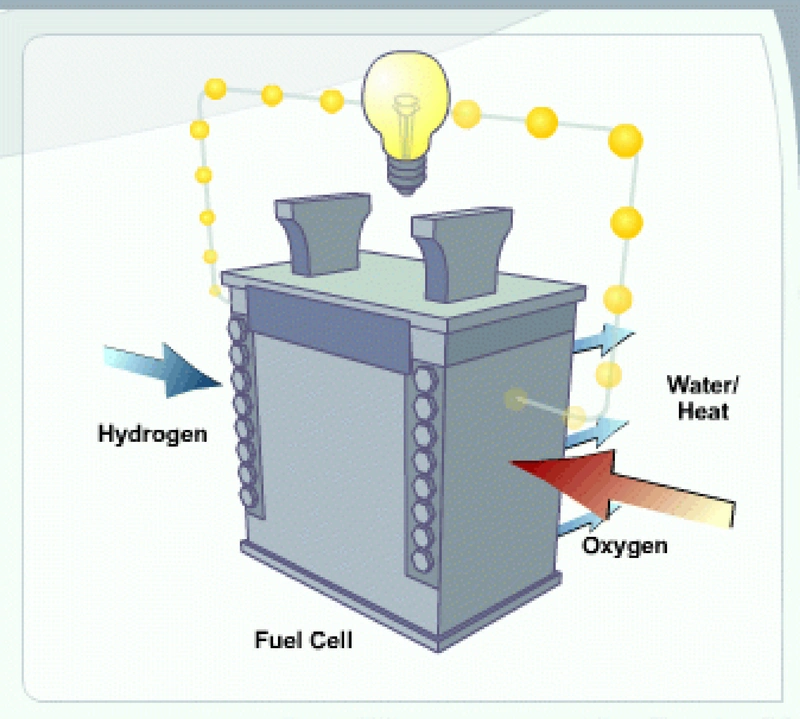 A fuel cell uses hydrogen (or hydrogen-rich fuel) and oxygen to create electricity. A polymer membrane is positioned between the incoming H and O2. The membrane allows the positively charged protons to pass through but not the negatively charged electrons which must flow around the membrane, forming an electrical current.

If pure hydrogen is used as a fuel, fuel cells emit only heat and water, eliminating concerns about air pollutants or greenhouse gases.

Sandia concluded that H generation can reduce maritime related emissions across many applications, e.g., for port equipment, auxiliary power for vessels and vessel propulsion, among other uses.

Still, there were problems—but after all, this was a research project. For example:

These technical issues were not viewed as insurmountable, and the report concluded, “Projections for full-usage deployments indicate that cost reductions in fuel cell technology, balance of plant items and hydrogen fuel can result in cost parity with diesel generation.”

Reductions with fuel cell costs were viewed as most likely to happen soon. After all, fuel cells have been around for decades, and next-step improvements would be to a familiar platform.

The tougher challenges were the same issues being confronted today, five years later: the cost of the hydrogen and storage (for this project the H was provided free, courtesy of the Air Force).

Additionally, Sandia described challenges beyond the generator. Labor, logistics and legal matters impacted “the operation of the fuel cell significantly.” New and different safety issues required close attention. The report raised rather unthinkable concerns. One example: that a release of unignited hydrogen might be sucked into a tug’s interior spaces, while the tug was adjacent to the generator, or into the tug’s diesel air intakes. This was eventually judged unlikely, at least with this project. But it exemplifies the myriad of outside-the-box issues raised by the prospect of using a novel and dangerous fuel in a dense work zone and the need to evaluate each issue.

Unfortunately, once completed, the fuel cell project stopped. A subsequent project at the Scripps Institution of Oceanography was derailed by COVID. Now the unit is idle and likely to be decommissioned.

Sea Change
This past February, the Sea Change, the world’s first commercial hydrogen fuel cell, 70-foot, 75-passenger ferry was launched for sea trials in Bellingham, Wash. The Sea Change was built by All American Marine (AAM) for SWITCH Maritime.

The fuel cell was built by Zero Emission Industries, whose CEO/CTO is Joseph Pratt, PhD, a Sandia Labs alum. The power package is comprised of 360 kW of Cummins fuel cells and Hexagon hydrogen storage tanks with a capacity of 246 kg.  This system is integrated with 100 kWh of a lithium-ion battery provided by XALT and a 2x 300 kW electric propulsion system provided by BAE Systems. AAM writes that “the hydrogen fuel cell powertrain system affords the same operational flexibility as diesel with zero emissions and less maintenance.” 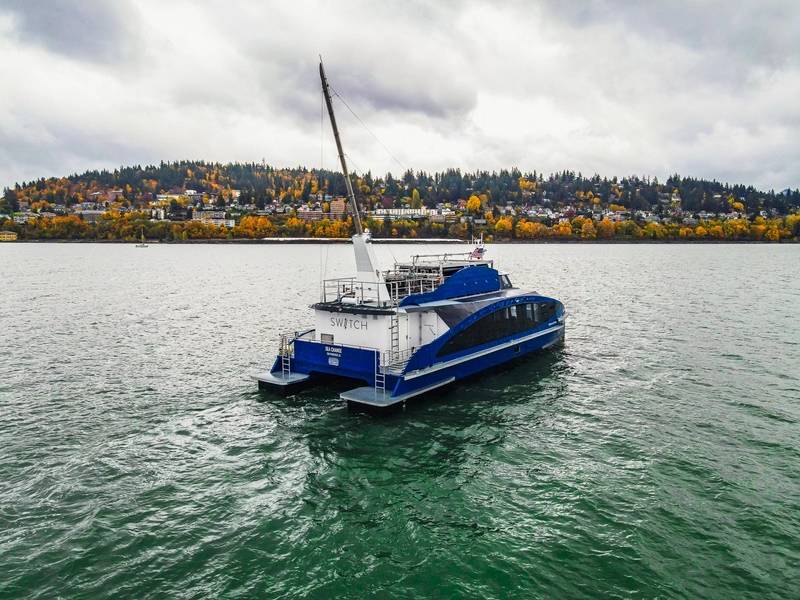 Joe Pratt was asked about how the Sea Change trials went. He said there were some “typical conditioning things, some having to do with the boat and some with the H fuel cell, but at the end of the day everything worked well.”

Pratt stressed that “H fuel cells are nothing new,” the tech has been in the market since the late 1990s, powering numerous vehicles, from forklifts to buses to passenger cars. “We understand what it’s going to take to get the system to work,” he commented.

Pratt said the next challenge is to streamline production. “Our biggest lesson learned,” he commented, “is that we need to make this a lot simpler and go from 300 different steps down to five.” Pratt wants to deliver a fuel cell package like a diesel engine gets delivered. Then, the shipyard can work with a unit, rather than a process. “We want the shipyard to be able to drop them into the boat and connect a few hoses,” Pratt explained. “That’s what we’re working on right now, to make it easy for vessel owners and shipyards.”

The Coast Guard participated in the Bellingham sea trials. CDR Frank Strom, Chief, Systems Engineering Division, Office of Design and Engineering Standards at Coast Guard Headquarters, explained that the CG’s inspections were to “verify compliance with 46 CFR Subchapter T requirements,” focusing on mechanical and electrical systems including propulsion, steering, navigation, and automation. These inspections mostly occur at the pier but an “underway trial,” is also required and, indeed, was completed.

Strom was asked about hydrogen specific issues. He said that current Subchapter T regs do not consider the use of lithium-ion batteries or hydrogen as fuel. The Sea Change is regulated by “a design basis agreement,” he explained, “which serves to augment federal regulations with applicable hydrogen safety and construction standards in order to achieve an equivalent level of safety.” During Sea Change construction, the Coast Guard “verified that the hydrogen and lithium-ion battery systems were performing in accordance with their design, which was made to those standards.” There is no effort underway right now to revise Subchapter T to include H or lithium-ion battery propulsion.

Strom explained that the Sea Change crew, as with all vessels, must demonstrate the ability to respond to “fire, flooding, abandon ship, and man overboard situations.” With the Sea Change, verification also included an “assessment of the crew's hydrogen-specific knowledge and a further assessment of their ability to prevent and respond to all emergencies onboard the vessel, including those associated with the hydrogen fuel system and lithium-ion batteries.”

This process continues when the Sea Change moves to San Francisco, its future port. Then, inspections will focus on hydrogen bunkering, crew training and competency, and operational requirements presented by the use of hydrogen as fuel. The goal is for Sea Change to earn its Certificate of Inspection so that it can carry passengers.

DNV forecast
In June, DNV released an extensive document – Hydrogen Forecast to 2050 - DNV – a close look at hydrogen’s potential to become a central fuel by 2050. The Forecast focuses on Europe, but the advisories are applicable in the U.S., and elsewhere, of course.

DNV estimates that H will provide 5% of global energy demand by 2050, although likely to meet 11% in Europe. The 5% level is too low for H to proportionately contribute to Paris Agreement reductions.

In a foreword, written by Remi Eriksen, DNV’s group president and CEO, Eriksen comments that in many ways, H “should be thought of as the low-carbon energy source of last resort. However, it is desperately needed (especially) in those sectors which are difficult or impossible to electrify, like aviation, shipping, and high-heat industrial processes.” Eriksen writes that safety “must not become (hydrogen’s) Achilles heel.” 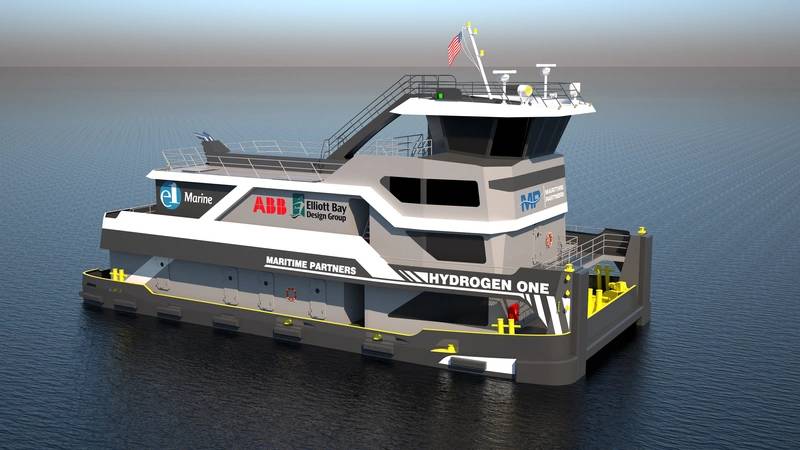 DOE’s next steps
Given the extensive history on H research it’s worth asking: How did this body of work inform DOE’s request for comments pertaining to directions and goals for Hydrogen Shot?

Sometime between 2023 and 2026 DOE plans on selecting at least four regional H hubs. The other tasks—a H Roadmap, a clean H standard, and electrolysis and manufacturing—will be mostly analytical, research based, funded over the next four years.