Hydrogen on the High Seas 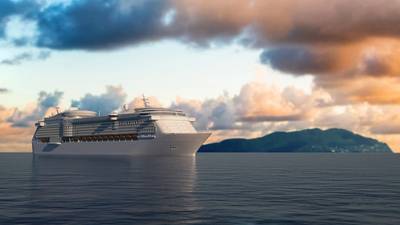 George Skinner, a safety expert with Ballard Power Systems, based in Vancouver, Canada, discusses why hydrogen makes sense as a marine fuel.

As a global provider of innovative clean energy solutions, Ballard Power Systems has years of experience in the deployment of hydrogen fuel cell systems for land-based use, with the first developments dating back to 1983. Ballard’s work with marine hydrogen as a fuel goes back to their role as advisors to the Canadian military.

“The Canadian Navy has had fuel cells in their submarines since 1993,” George Skinner says. This fact alone demystifies hydrogen as high risk – the last place you want a dangerous fuel is on board is in a steel tube hundreds of meters under the sea.

The company's focus in the use of hydrogen for marine applications turned to more commercial areas around 2000, with a few projects for large cruise and ferry companies. “Beyond its properties as a fuel, hydrogen is interesting as a carbon neutral alternative. It basically sidesteps emissions issues that the maritime industry needs to resolve,” Skinner observes.

“Once you are set up with hydrogen, you are flexible. Regardless of how it is produced – by solar, gas, hydropower, or wind – hydrogen is the energy carrier.” A good example is Denmark, he says, where they have periodic surplus power from wind that they convert into hydrogen for later use.

Size matters
“The bigger the better for fuel cells,” Skinner says. “Hydrogen takes more room than fossil fuels, but it is lighter, and it can be compressed to very high pressures. Basically, you just keep liquid hydrogen in a giant thermos. The tank is heavy, so it is not always efficient for small machines. A hydrogen solution is likely more practical for shipping, where they can also have a better insulated tank.”

DNV GL, a globally leading quality assurance and risk management company, published the first rules for hydrogen on ships in January 2018. The rules are linked into codes and standards for other industries with a longer hydrogen history. “The basic principles are the same for LNG (liquefied natural gas) or other low flashpoint fuels. We already know how to handle liquid gas, so the technology is broken in. The real challenge now is developing the infrastructure.”

Though Skinner reports an uptick in interest from inland waterway operators in recent months, ferries and cruise are still the frontrunners. “For the cruise industry, it is a combination of environmental, regulatory and marketing advantages. They are looking at the long term, and they would rather be set up for hydrogen than rely on the future of carbon fuels. We believe that as a first step, the cruise industry will look toward a hybrid solution, using fuel cells to power hotel functions in ports and when in protected fjords. Eventually they could apply it to provide power for the entire vessel, including propulsion.”

Skinner points out the many potential advantages for hydrogen as marine fuel. “All-electric drives are already common, so the power plants could simply be exchanged. Ultimately the need for diesel on a ship would be greatly reduced or eliminated. Hydrogen systems also allow more freedom of placement in the vessel. And hydrogen-powered fuel cells produce water that can be used for other purposes on board.”

It’s the same, only different
With decades of experience, Skinner can assure the public that hydrogen is not necessarily more dangerous or safer than other fuels – just different. “Other considerations have to be made. Hydrogen has a less explosive energy, it burns quicker and colder, and it disperses straight up. It is very easy to ignite, so it is important to prevent leaks, install sufficient detection systems, and always have enough ventilation. The International Code of Safety for Ships using Gases or other Low-flashpoint Fuels already lays out ways to deal with it, and DNV GL is looking into improved piping systems. New codes and standards are also under development.”

'“Ultimately, the objective is to make a failsafe fuel cell power plant. We have done this on land, so it can be done at sea. Fuel cells have a long life and they are relatively low in maintenance. Just turn them on and let them run.” Skinner maintains that the main problems with hydrogen have been connected to perceptions from the past, such as negative associations with the Hindenburg case – the German passenger airship LZ 129 Hindenburg occurred on May 6, 1937, as it caught fire and was destroyed – and the hydrogen bomb. “In fact the hydrogen bomb is a nuclear reaction, so this is a total misrepresentation. Hydrogen is ubiquitous in industry, aerospace, and many forms of transportation.”

He points out NASA’s decades of experience using hydrogen as rocket fuel, noting that Viking Cruises have been in discussions with NASA to learn more about loading the fuel. Ballard Power also runs its own fuel cell lab on liquid hydrogen. “We have been getting deliveries twice a week for 20 years. Getting it from shore to ship will be basically the same thing. After all,” he smiles, “it’s only rocket science.”

ABB and Ballard Power Systems have recently signed a Memorandum of Understanding (MoU) on developing next-generation fuel cell systems for the marine industry. The new fuel cell power system will be jointly designed, developed and validated, and is anticipated to play a significant part in accelerating the industry-wide adoption of sustainable solutions for marine e-mobility, and help shipowners meet the increasing demands for clean operations. Together with Ballard, ABB will leverage the existing kilowatt-scale fuel cell technologies and optimize them to create a pioneering megawatt-scale solution suitable for powering larger ships. With an electrical generating capacity of 3MW (4,000 HP), the new system will fit within a single module no bigger in size than a traditional marine engine running on fossil fuels.

Skinner sees the trend toward marine hydrogen fuel as an exciting opportunity. “The quantities in marine will get energy companies engaged, which will solve the infrastructure conundrum. And once hydrogen is available in ports for ships it can be used to fuel trucks and other movers of goods and people. The onset of marine hydrogen will be a major catalyst for kicking off the hydrogen economy.”

CMR Group delivered an alarm monitoring and engine control system for use onboard the tug DHB Doughty. Built in 2000, Doughty…