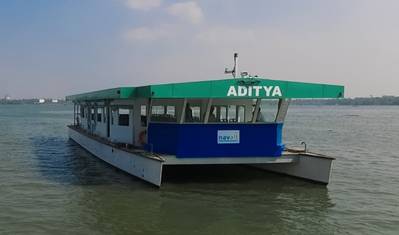 Over the past three years, P. Ravindran’s commute from his southern Indian village has been about more than getting to work - the SIM card seller sees his daily trip on India’s first solar-powered ferry as doing his bit for the green revolution.

“I am proud to be a frequent traveler on the Aditya... I am being part of cleaning the Earth,” said Ravindran, who uses the boat most days to travel to the town of Vaikom on Lake Vembanad.

An internal impact study produced in January by the Kerala State Water Transport Department (KSWTD) showed the ferry generates close to zero polluting emissions and is at least 30 times cheaper to run than its diesel counterparts.

The state government now plans to put two more solar ferries and a solar-powered cruise ship into service on Kerala’s backwaters by the end of the year.

Recently, the transport department decided to switch all Kerala’s 48 diesel ferries to solar within the next five years.

Each day, the Aditya carries about 1,700 passengers on a 3-kilometer (1.9-mile) route across the lake, between Thavanakadavu village and the town of Vaikom, according to the KSWTD study.

It runs on 70 kilowatts of electricity, of which 65 is supplied by the boat’s solar panels and the rest from the grid.

KSWTD director Shaji V. Nair told the Thomson Reuters Foundation that the Aditya has cut the amount of pollution people living near the water route are exposed to.

Along with financial savings, the ferry produces almost none of the air pollutants and heat-trapping carbon emissions characteristic of diesel engines.

Burning fossil fuels for power, transport and industry is the main source of the emissions that are heating up the Earth’s climate and fueling high levels of air pollution.

Over its three years of operation, the Aditya has saved more than 100,000 liters (26,400 gallons) of diesel and 280 tonnes of carbon dioxide emissions, the impact study said.

Salesman A. Mamakutty, who makes regular trips on the Aditya, is happy more solar ferries are due to hit the water.

“I am dreaming that a day will come very soon when all passengers on Vembanad Lake will be travelling on this kind of solar ferry - and all of us can breathe fresh air,” he said.

Early scepticism
Dileep Krishnan, chair of the technical committee at the Cochin University of Science and Technology which led the feasibility study for the Aditya project, said that initially no one was confident India could build a solar ferry that was affordable to run and produced no emissions.

“We felt that many of (India’s) other solar-powered projects were unsuccessful due to high costs and lack of measurable results,” said Krishnan.

The committee and the Kerala water transport department gave the Aditya project five years to break even on operating and fuel costs - and even that was considered ambitious.

“But in the short span of three years, our target with the Aditya has already been achieved,” said Krishnan.

The Kerala government decided in 2013 to explore the feasibility of bringing a solar ferry to the state’s backwaters but when it put out a tender, major Indian boat-making companies were reluctant to respond, according to Nair.

As the sole bidder, Sandith Thandasherry, a young naval architect from Kerala, won the contract.

With 20 million rupees ($267.3 million) of funding from the Kerala government, Thandasherry’s startup firm, NavAlt Solar & Electric Boats, built the 20-metre-long catamaran ferry boat made from glass-reinforced plastic with photovoltaic panels on its roof.

“When we did it, many people in the industry and academia expressed the opinion that a solar ferry carrying 75 passengers was nearly impossible,” Thandasherry said.

“Now imagine the environmental impacts if the entire water transport system was turned into solar,” he said.

Other popular solar-powered ferries around the world include the Alstersonne on Hamburg’s Alster River in Germany and the Solar Sailor in Australia’s Sydney harbor.

P. Suresh, managing director of state-owned Steel Industrials Kerala Limited (SILK), which manufactures diesel-run ferries, welcomed the Aditya’s success but said solar ferries had yet to prove themselves as an established mode of transport.

Solar sets sail
In May 2019, a delegation from the International Solar Alliance (ISA), including ambassadors from 25 countries, visited Vaikom to study the Aditya project, local media reported.

After a trip on the solar boat, Upendra Tripathy, director general of the ISA, which was set up by India and France, said the Aditya could serve as a model for other countries where limited resources make solar-powered projects a hard sell.

The Aditya offers the same performance and safety standards at less than half the cost of electric ferries operating in Europe, making it easy to replicate in ISA-member countries in Asia, Africa and Latin America, said NavAlt’s Thandasherry.

“Within a very short span of time, the Aditya has turned out to be a replicable model in mitigating climate change,” said V.S. Vijayan, former chairman of the Kerala State Biodiversity Board.

The ferry has also debunked the argument that solar initiatives are costlier than other power sources, he noted.

“On the contrary, the solar ferry proves how it could be affordable for the common man,” he said.

Nair at the water transport department noted that the Indian state of West Bengal and authorities in the Andaman and Nicobar Islands in the Bay of Bengal are now planning to add solar ferries to their waters.

“I am still surprised over the relentless calls I am getting from the nooks and corners of the world,” he added.