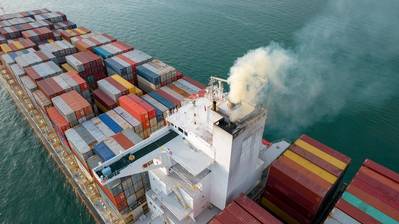 World leaders attending COP26 climate talks from the end of the month must ratchet up pressure to make shipping decarbonize by 2050, a senior industry official involved in the meeting said.

Shipping, which transports about 90% of world trade, accounts for nearly 3% of the world's CO2 emissions.

U.N. shipping agency the International Maritime Organization (IMO) has said it aims to reduce overall greenhouse gas (GHG) emissions from ships by 50% from 2008 levels by 2050. The goal is not aligned with the 2015 Paris Agreement on climate change.

"I am hoping we will get that increasing ambition at COP and that will play out into IMO," Katharine Palmer, the UN's high-level climate champion’s shipping lead, told Reuters.

"At least 50% (reduction) by 2050 is no longer good enough in the IMO's GHG (greenhouse gas) strategy," she said on the sidelines of a Global Maritime Forum conference in London this week.

Palmer will represent non-state actors at the COP26 talks in Glasgow, Scotland, that begin on Sunday to try to implement the 2015 Paris Agreement that seeks to limit global warming to 1.5 degrees Celsius (2.7°Fahrenheit).

At the same time, a growing number of countries have supported zero carbon shipping by 2050 including Britain, host of the COP26 meeting.

Palmer said countries could not "achieve their net zero country targets without including transport", although she said there needed to be "recognition that not everyone can move at the same pace".

The IMO’s Secretary General Kitack Lim said on Tuesday member states had started wider discussions, which included "the upgrade of our ambitions in IMO’s GHG strategy".

U.N Secretary General Antonio Guterres earlier this month urged action to enable zero emissions ships to be commercially available by 2030 "to achieve zero emissions in the shipping sector by 2050".

Adding to the voices for action, Rasmus Bach Nielsen, global head of fuel decarbonization with trading company Trafigura, said decarbonizing shipping was urgent. "We need policy makers to step up and take decisions at lightning speed," he said.