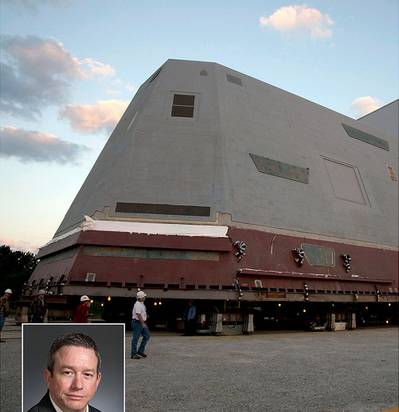 'President's Awards for Excellence' have been awarded to 5 teams & 3 individuals for their outstanding & innovative work on shipbuilding projects.

"We build very sophisticated and complex products, and it takes skill and innovation to do it more cost-effectively," said Ingalls Shipbuilding President Irwin F. Edenzon. "These awards recognize the forward-thinking measures our shipbuilders are taking on a daily basis to improve our performance and streamline our processes. These awards acknowledge our commitment to quality and to meeting our customer's expectations as they face ever-increasing budget pressures."

Each year, Ingalls presents the President's Award for Excellence to shipbuilders for their outstanding contributions in the areas of innovation and technology, customer satisfaction and operational excellence.

Donny Dorsey
As head of operations at the Gulfport Composite Center of Excellence, Donny Dorsey led the facility through manufacturing innovation and the successful delivery of two large composite structures for the U.S. Navy. Dorsey's dependability and strong sense of responsibility inspire a greater sense of ownership and responsibility among those who interact with him.

Glenn Clement
Glenn Clement became craft director of coatings sheetmetal joiner and insulators in 2011. Well-known for his accomplishments in improving quality and controlling costs at Avondale, Clement implemented a number of significant changes and improvements in his new role in Pascagoula. These include improving environmental controls and managing costs by eliminating waste.

Mike Rogers
Mike Rogers negotiated a cost reduction of $3.3 million for steel plates. In addition, he researched and invoked a clause that protects the company against large price swings over six-month periods. Using this clause, Ingalls can execute purchase orders based on cost trends. This was used to achieve a $600,000 reduction for LHA 7.

This dedicated group collaborated with the U.S. Navy's Supervisor of Shipbuilding Gulf Coast to create a single electrical standards document for all cable way hangers to stabilize engineering, design, procurement, planning, manufacturing, installation and execution. This has streamlined the process of installing the hangers on all ships built at Ingalls.

As a result of the spinoff from Northrop Grumman and the decision to outsource IT infrastructure services to CSC, a transition plan was developed and executed. This team provided extensive project management oversight to all parties involved in the transition, exceeding all quarterly project milestones. Their hard work played a critical role in the successful transition.

This group supported the record-setting translation of America (LHA 6) on May 19, 2012, and the subsequent launch on June 4. For both critical milestones, the team devised and implemented a new oil recovery system to collect the "float coat" from the ballast tanks of the drydock. The system was utilized to ensure compliance with environmental protection requirements while ensuring a safe and successful launch of the ship in a cost-effective manner.

This group of shipbuilders developed, contracted and executed a medium-weight shock test process to prove bolts installed aboard LPD 24 were suitable for their intended application. Completing this test within a tight deadline was integral to the successful delivery of LPD 24.

Workers' compensation costs are a primary driver on the company's overhead rates. This group led a number of initiatives to help reduce costs associated with workers' compensation. Some of these initiatives include pre-employment physical agility testing, an awareness campaign, directed care and a work-hardening program.