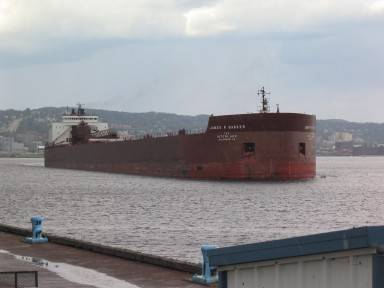 Interlake became the first U.S.-flag fleet to test scrubbers on the Great Lakes in April 2015 after pioneering the emission-reduction technology on its M/V Hon. James L. Oberstar.
“Implementing this innovative scrubber system on our 1,000-foot class ships will make an even greater impact on reducing our fleet’s carbon footprint,” said Interlake President, Mark W. Barker. “Leading the way with emission-reduction technology is just another example of our commitment to continuous improvement across our fleet.”
Fincantieri Bay Shipbuilding handled the installation on the 806-foot Oberstar, as well as the second phase of installations on the 1,004-foot Barker and the 826-foot M/V Lee A. Tregurtha, which is slated to sail later this month.
A total of five Interlake vessels, including two additional 1,000-footers: the M/V Paul R. Tregurtha and M/V Mesabi Miner, will be outfitted with these types of scrubbers by 2017.
The James R. Barker is equipped with the same single-inlet, closed-loop DuPont Marine Scrubbers from Belco Technologies Corp. (BELCO), a DuPont company, that were installed on the Oberstar.
The scrubber units, which are attached to the exhaust system of each of the ship’s two engines, effectively strip the majority of sulfur from its stack emissions. Exhaust gas from the engine is sent through a series of absorption sprays that “wash” and remove impurities, specifically sulfur and particulate matter. That washed exhaust gas then travels through a droplet separator before a clean plume of white steam is discharged into the atmosphere.
Propelled by a long-term vision to create the most efficient and environmentally friendly fleet on the Great Lakes, Interlake is shoring up its 10-year, $100 million fleet modernization which includes the steam plant conversion program and the repower of its final vessel, the Herbert C. Jackson.
• DuPont • exhaust gas • exhaust gas scrubbers
Email