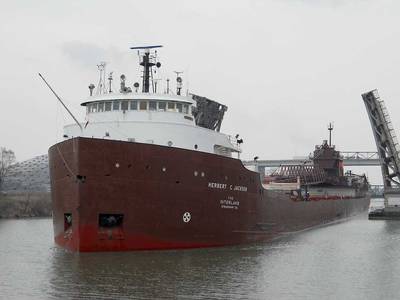 The Interlake Steamship Company announced that it will repower its last steamship, the S.S. Herbert C. Jackson, with a highly automated diesel propulsion system in the final phase of a 10-year, $100 million modernization effort to create the most efficient, reliable and environmentally friendly fleet on the Great Lakes.

The six-month diesel conversion, which is slated to begin in mid-December, is the fifth major overhaul to Interlake’s fleet and its fourth steam-to-diesel conversion since 2006.
“This repowering illustrates Interlake’s continuing commitment to shrink its environmental footprint by reducing emissions throughout our fleet,” said Interlake President Mark W. Barker. “We have a long-term vision for our industry and we are investing in our equipment and our ships to offer the most reliable, efficient delivery within an industry that is the greenest form of transportation available.”
Since 2007, Interlake has reduced its emissions dramatically. For example, through 2014, the company estimates it has lowered its particulate matter by 30 percent, sulfur oxides by 54 percent and carbon dioxide by 47 percent. In April 2015, Interlake debuted the installation of exhaust gas scrubbers on the bulk carrier M/V Hon. James L. Oberstar, becoming the first U.S.-flag fleet to test the emission reduction technology on the Great Lakes.
Built in 1959, the Jackson’s vintage steam turbines and automation would require costly upgrades for the ship to remain a reliable workhorse in the fleet.
“It’s a sad day leaving the era of steamships behind but it’s a good day as we move forward,” said Barker about the last steamship being repowered. “We only have nine months a year to carry close to 20 million tons of cargo for our customers. It’s critical for us to be able to do that without any delays. To meet that goal, we have to invest and keep our ships outfitted with the best equipment in the industry.”
The company is in discussions with potential shipyards to do the repowering work. The 6,250-BHP propulsion package will include a pair of MaK – six-cylinder M32E engines which will give the ship enhanced propulsion capabilities and reliability. In addition, the repowered Jackson will receive a twin-input, single-output Lufkin gear box with twin pto shaft generators, a Schottel controllable-pitch propeller system and Gesab exhaust gas economizers along with an auxiliary boiler. The Economizers allow the ship to harness the waste heat and energy from the main engine exhaust and produce “free steam” to heat the accommodations and for heating various auxiliary systems and fuel oil services. These installations will net the Company even greater emission reductions.
“The Engineering Team at Interlake is excited to be working with the professionals at Toromont Cat, a division of Toromont Industries Ltd., on another project,” said Phil Moore, Fleet Superintendent at Interlake. “The Toromont group provided engineering services, the MaK equipment and auxiliary propulsion systems on the successful diesel engine replacement of the M/V Paul R. Tregurtha. Toromont made it an easy choice to work with them again on the Str. Herbert C. Jackson repowering.”
The Str. Lee A. Tregurtha was the first ship to be repowered with a highly automated Bergen diesel engine power plant in 2006. Similar engines were installed in the Hon. James L. Oberstar (then the Str. Charles M. Beeghly) in 2009. In 2010, the M/V Paul R. Tregurtha, Interlake’s largest freighter at 1,013-feet long, underwent a diesel engine replacement using MAK engines. The Str. Kaye E. Barker was the last steamer to be repowered with Bergen diesels in 2012. The design and engineering of the power plants have been led by Ian Sharp, Director of Engineering for Fleet Projects. Sharp is currently completing the design of the Herbert C. Jackson’s new propulsion plant.
Headquartered in Middleburg Heights, Ohio, the Interlake Steamship Company was launched in 1913. For more than a century, the company has led the Great Lakes shipping industry through its commitment to flawless service, environmental stewardship and continuous innovation. ISO 9002 certified, Interlake’s fleet of nine vessels deliver raw materials to ports throughout the Great Lakes region.
• auxiliary systems • bulk carrier • emission reduction technology
Email