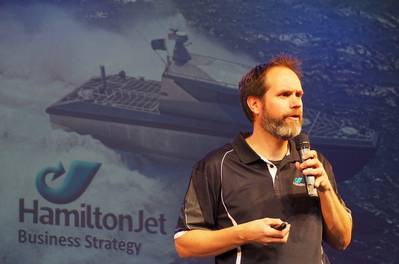 Raised in Shropshire, Reed graduated from Loughborough University of Technology in 1995 and later became a Chartered Engineer and Fellow of the Institute of Mechanical Engineering. He’s worked for a U.K. gas utility company developing natural-gas-powered engines; Ford Motor Company as a Systems Analyst, and 17 years for Caterpillar UK in diesel engine and transmission development for off-highway machinery and military products, having held a variety of roles from Development Engineer through to Engineering Program Manager and Chief Engineer.

Eight years ago, Reed was approached by HamiltonJet in New Zealand to lead its new product development activities. So, Reed and his wife decided to move to New Zealand for the experience, bringing their four children with them. Within three years, Reed was appointed to lead the business, and the family has decided to stay in NZ long term.

Please introduce HamiltonJet, giving a brief overview of its main products, locations, client base and employees.
HamiltonJet is the world’s leading manufacturer (by market share) of waterjets and vessel control systems in the commercial and military space. Our smallest jet, the HJ212 is found in small craft, upwards of 5 meters long. It weighs 80 kilograms and would usually be found in single or twin driveline form with simple cable actuated controls. We then have another 17 different jet sizes, ending up with the HT1000, an 8,000-kilogram monster that would be found in pairs or quad configuration, in oil and gas or military applications up to 70 meters with electronically controlled hydraulic controls.

The company was founded in 1939 by Kiwi Industrialist Sir William Hamilton, widely recognized as the grandfather of the modern waterjet. Today it employs 400 people in six countries: 350 people are in Christchurch, New Zealand where all design, development, manufacturing and business functions reside, plus three regional offices with around 50 total staff in Singapore, London and Seattle. These support 55 distributors across the globe with parts, sales and service support. Some 97% of products are exported, with customers all over the world.

How do you see waterjet technology advancing, and how is HamiltonJet preparing for the future?
Over the last five years the company has really ramped up investment in products and technology development. This is foundational to our strategy and falls into several parts:

Waterjets: We are working on gradually replace our entire waterjet line-up with newer, more efficient, more robust models. Each new jet is coming in between 3% and 7% higher in propulsive efficiency than the model it replaces, delivering lower fuel consumption and higher speed. They also generate more thrust at lower speeds which is great for certain applications like wind-farm support. These new jet models are also easier to install and simpler to integrate.

Controls: We recently introduced a brand new electronic control system designed to the most rigorous class authority standards, called AVX. This, plus the soon to be released AVXexpress for smaller craft will replace both of our older control systems and offer a solid platform for future technology integration. Both systems offer multiple layers of redundancy, exceptional reliability and availability, and some truly innovative features. The best example is our GPS based control system called JETanchor which can automatically hold position and precisely maneuver a vessel with incredible accuracy.

Looking ahead, what are your top priorities for the remainder of this year?
It is looking like a busy year. Sales wise, we have seen activity increase and we are now approaching pre-COVID levels. We also have a number of high-profile projects in the electric and hybrid drive space that will go to order. We have two new jet model releases (The HTX42 is imminent and the HJX27 at the end of 2021) and a ‘lite’ version of our control system called AVXexpress. Finally, we will continue our development work with Sea Machines on the pilot-assist system and a few other innovations. We are excited by the way all these releases will improve the operational effectiveness of our customers. 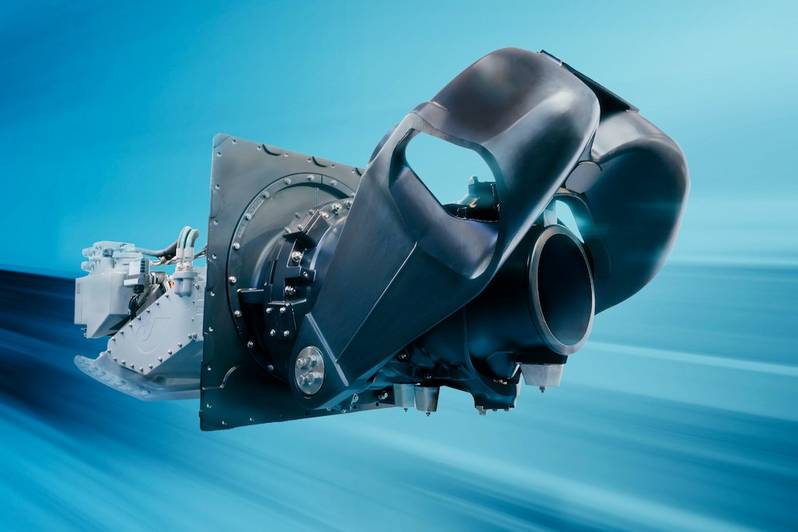 Why was the HTX42 waterjet introduced, and what are its key advantages? Which vessel types is it best suited for?
The HTX42 is the fourth in our new range of jets, ultimately destined to replace the 18 models we have today. Each model is being developed to be more efficient, more reliable and easier to install/maintain than its predecessor. These jets are gaining traction in the governmental, military and patrol market where large, volume contracts have been won with each new model already. In addition, they are proving popular in commercial applications where their combination of class-leading hydrodynamic performance and robustness are critical buying criteria.

What portion of HamiltonJet’s commercial/government business is in the U.S.? How do you see business in this market today, and where do you see greatest opportunities?
Th U.S. and Canada represent about 26% of our total business, with Asia Pacific being 45% and EMEA being 29%. The U.S. market for us used to be bigger when oil and gas was booming in the Gulf of Mexico, however it still remains our single largest country of sale and a hugely important market to us. The largest opportunities lie in the renewal and expansion of the ferry fleets on the east and west coasts, the current increasing momentum in offshore wind power, and of course a growing number of military and governmental projects.

We aren’t at liberty to say much about our involvement in military projects, but a great example of our products would be the U.S. Navy MKIV Patrol Boat. This vessel has two of our HM651 waterjets in it, with 12 active in the U.S. fleet, plus several gifted overseas by the U.S. Foreign Military Sales (FMS) program. We work with militaries and coast guards around the world, with projects Europe, the Americas, Middle East and in Asia (where we have hundreds of vessels in service with the Japanese, South Korean and Taiwanese Coast Guards, as an example).

Of all the projects you’ve been involved in over the course of your career, which is your favorite and why?
I think my favorite has been the creation of our Future Products team, and in particular the development of a whole new product line for us in the Hybrid and Electric vessel space (EHX). Fostering innovation in an established company is really hard, so we took the bold decision to separate some of our most talented engineers from their day jobs and give them a budget to innovate. We gave guidance as to the areas we thought needed our attention, but we did not get in the way of their work. We simply told them to make sure they focus on things that quickly can become products (not just blue-sky research) and get to demonstration as quickly as possible. The result was phenomenal. Within two years we have developed and launched a fully integrated, automatic hybrid-electric drive for commercial and military vessels, built a 15-meter demonstration vessel to prove it works, developed a new business partnership and future product with Sea Machines Robotics, and been granted a patent that could be significant in the offshore wind segment. I think this has put is in a leadership position in the key areas of vessel autonomy, digitization and electrification of marine systems.