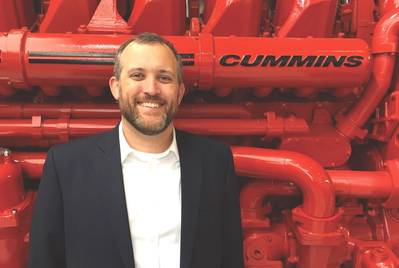 How do you see business today, and where is Cummins looking for opportunities as COVID-19 and volatile oil markets generate market uncertainty?
Even in the current state, we are still seeing a solid level of interest and activity in the commercial marine space. Scheduling has been impacted and some areas have slowed down, but overall, the marine industry is very much still active around the world.

When we take a closer look at some of the segments within the commercial marine space, differences begin to emerge. In the commercial transport sector, where they have operated throughout the pandemic, we are still seeing a need for new builds as well as repowers. But in other areas, for example the fishing industry, operators are experiencing lower demands so there could be some follow-on effects later in the year or into 2021.

Our engines are known for their durability and during this time, as always, we are working with customers to extend the life of their engines and manage operating costs. An example of this is extending filter change intervals through application and fluid analysis.

There are some opportunities on the horizon. As Tier 4 implementation increases, we anticipate seeing more opportunities for our solutions in U.S. vessels. We are also seeing some movement around windfarms. While not as common in the U.S. yet, conversations have begun around how that industry could take shape. Cummins is working with operators to understand their needs and will look to leverage our extensive experience in the area of offshore support and services as we are sure there will be some parallels in this developing market.

For the most part, our customers continue to build and operate, even if constrained, but it remains to be seen what to the longer-term impacts could be in 2021 and beyond.

What have been the greatest challenges to maintaining operations throughout the health crisis?
During this crisis, we have all been challenged to manage those things in our control as well as those out of our control. To help the industry make it through this, we continue to focus on the things that we do well to keep our customers operating. Supply chain management, or manufacturing, is a fundamental area where Cummins exceeds. With our global manufacturing footprint, and extensive experience working with suppliers, we have been able to manage through the extensive challenges presented with quarantines and pandemic and have effectively returned to close-to-normal efficiency in our plants.

Another area that sets Cummins apart is our global service and support network. As the virus spread, we quickly found ways to adapt to social distancing and travel restrictions, continuing to provide customers with the support that they rely on to continue their missions. Here in North America, engineers such as Carl Hadler and other members of our team have worked tirelessly to keep essential vessels moving up and down the rivers.

Other members of our team have implemented additional remote diagnostics tools, continued sea trials on new vessels, and worked closely with customers needing a new vessel or a retrofit. For example, the install of the QSK38 Tier 4 solution on the field test vessel, which is a retrofit, has been completed and the vessel has returned to normal operations.

Given the current state of the market, do you see appetite for new products? Is Cummins planning to roll out anything new for the marine sector in the coming 12 months or so?
Cummins marine continues to innovate. Our IMO III line, which was announced last year, is fully released and we are taking orders for our QSK60 and QSK38 Tier 4 solutions. To date, across all our industrial markets, Cummins Tier 4 solutions have accumulated more than 10 million hours in the field. Also, there is a forthcoming genset package in the 99kW range that will pair well with our propulsion solutions that are used on inland waterways vessels. We realize that power is just part of what our operators need to run a successful fleet, which is why we will be releasing a new connected vessel solution later this year. 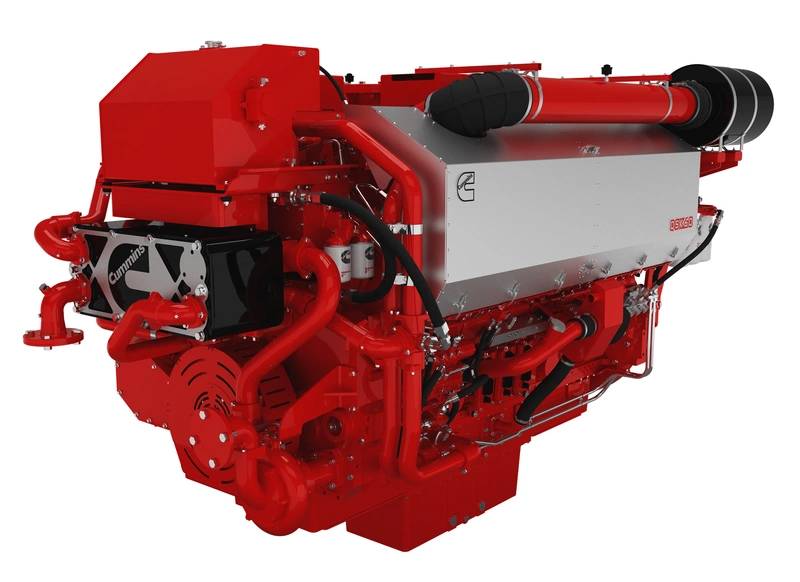 How will last year’s Hydrogenics acquisition impact Cummins’ marine business? Are there any projects underway to speak of?
Hydrogenics is the foundation for Cummins’ hydrogen fuel cell business and will be the primary channel for development and new hydrogen-related product launches.

Hydrogenics’ Fuel Cells Power Modules can be used for both auxiliary and propulsion power. With on-board hydrogen storage, fuel cells can produce power for the length of most trips. In addition to power, our fuel cells modules offer other potential benefits including reduced noise and vibration, reduced maintenance, improved part-load efficiency and flexible design based on manufacturer or operator needs.

What are some of the main R&D focus areas for Cummins?
Cummins is looking at a few different areas. We're still very focused on diesel as a fuel and working to make our engines as clean and efficient as we can. There's plenty of discussion on renewables and carbon and that—all very important conversations—there's still very much a drive that the diesel technology is going to be around for a while. I think in the midst of that, and in a lot of the work going on whether it be EPA 4, IMO III, a lot of R&D is going into simply meeting emissions requirements and adding value to those products.

Electrification is another example. We have a lot of that applications and other markets, so we're looking at how we can expand beyond existing markets and bring it into the marine space.

Cummins, in general, is looking at some other opportunities such as fuel cells, as mentioned with the acquisition of Hydrogenics, and some others. We’re certainly trying to look into renewables and understand how that's going to play out and eventually deliver solutions. In the last year, we created a new power business unit to have a group very focused on looking at technologies that may be outside of the traditional diesel space. Fuel cells, battery technologies, telematics and hybrids; All of that sort of stuff is parked in that business unit. We're very focused on, again, making acquisitions in those spaces, both I think the battery space and in the fuel cell space, among a few other things.

But I would say it's a bit of a duel path. Our efforts are certainly still very focused on diesel, but really planning for the future as we go. 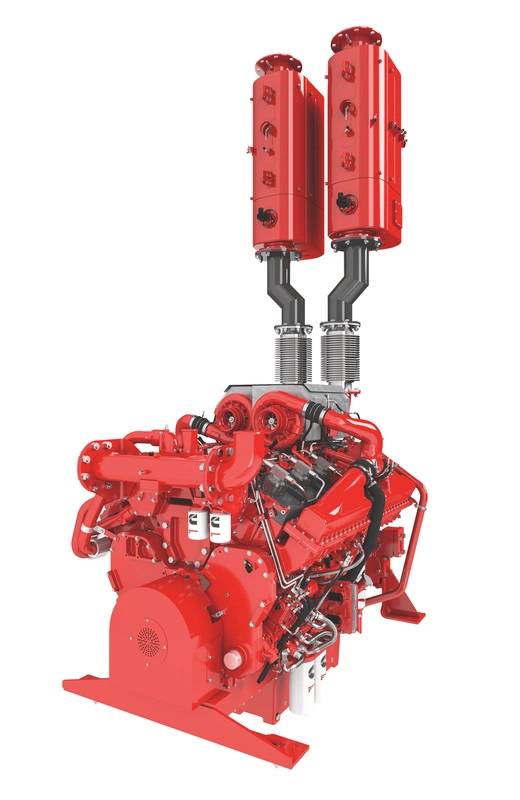 Why has EPA Tier 4 been a bit slow to catch on for inland river operators? Is it because of cost, or maybe engineering challenges?
Ithink there’s several reasons. Customers on the rivers tend to be a bit more conservative in what technology they're adopting. As a customer, they're often the ones looking at it a little longer than others, sometimes watching and waiting.

Another thing is they still have other options. Inland river vessels live a long time, and sometimes find a second life. So, owners have options to repower their vessels rather than build new ones. Most of the newbuilds are coming as a result of a shortage in the fleet, or a particular customer making a strategic move to grow their fleet and try and win some business. So right now, I think they've managed through by just not building a whole lot of new boats and just repowering what they have. And I can't say if that's strictly tied to challenges on the river where there isn't a growing business, or that is more of intentional and watching and waiting.

And there were some customers that knew the regulation was coming and they spent the years leading up to it building new boats so that they didn't have to use the new technology. That's something we've seen in other areas around the world as well, where they actively try and build the fleet before a new regulation hits. And that can be either a complexity or a price issue, and certainly we understand that as well.

We do believe customers will get back to building some new boats. We believe there will be an adoption. On the inland rivers it's just been a little slower uptake than we've seen in some other segments.

Would you say the operational profile of these vessels also plays a part?
It certainly impacts how we develop a solution, but I don't think this is a driver for not adopting new technology.

One of the challenges specific to marine is that there are so many different ways people operate boats. On the inland rivers, there are a number of vessels that are not taking big tows. Maybe they're organizing the tows. They could be sitting around idling for a large percentage of the time. That's a specific challenge for developing systems that generally like to have heat going through them, such as aftertreatments. We have to pay attention to what's going on with both the engine and the aftertreatment to manage that for the different duty cycles.

So again, the challenge of the inland rivers is the amount of time that they idle. But that’s not all. The mission of that vessel and the complexity of operating on a river with a large number of barges going under bridges so safety is paramount so we're thinking about that as well.

Are you seeing much interest in autonomy and automated vessels? Do you expect wider adoption of these technologies in the near future?
We're involved in some dialogues with customers on autonomous vessels. In the government and defense space, there's a number of projects that are being talked about, and we've been involved in those discussions. There are going to be some places where they're going to make that work, and already making it work. There are some examples out there. So, it's not one of those things you can say, "I don't believe it's going to work." The question is, “Where is it going to work and where is it really going to be a differentiable service with an autonomous vessel versus a non-autonomous vessel?” So, I think the future is still bright for captains and operators of vessels.

One of the big challenges we see is maintenance of these vessels. How long are they going to operate autonomously before they get somebody onboard to service it? That’s one thing we've been discussing with the customers. How long are the intervals where these engines will not see any kind of service or maintenance so that we design the right components and take the right approaches to setting that up so that becomes successful?

But, whether it’s for safety reasons or cost reductions, there are going to be some spaces where autonomy makes sense, and we're going to be involved. I generally think that our engines would work well in those applications. A lot of that is the integration needed, which we already have experience with. We see it as a learning opportunity as the applications grow and maybe even a chance to gain some insights we don't have currently.

As the world’s largest cruise ship Wonder of the Seas, departed on her maiden voyage in the beginning of March 2022, she…