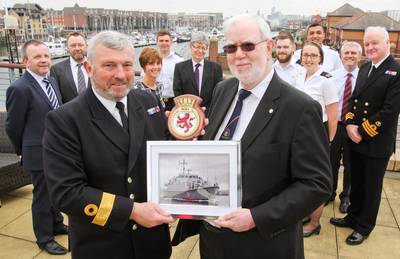 Commodore Gary Doyle presented an MCM1 (Mine Counter Measures squadron 1) crest and ceremonial photographs to Bob Troop, chairman and managing director of James Troop & Co, at the Royal Navy Regional Headquarters, Sefton Street, on April 14, 2016.
James Troop, a family-run company which is one of the oldest in the maritime industry, undertook a $2.89 million deal to replace and commission the Volvo Penta engines and generator sets on seven Royal Navy Sandown class Mine Hunters: HMS Bangor, HMS Ramsey, HMS Pembroke, HMS Penzance, HMS Shoreham, HMS Blyth and HMS Grimsby.
In total, James Troop, one of the major Volvo Penta Centers in the U.K., was tasked with supplying 25 engines and generators - three sets for each naval vessel, one for training and three on stand-by.
The work took place at bases in the U.K. and the Gulf, and James Troop also gave training to naval personnel on engine maintenance as well as providing on-going technical and spare parts support.
Commodore Doyle said: “It is a great pleasure to present this crest and ceremonial photographs to James Troop in recognition of its tremendous work on the Mine Hunter vessels. This work is crucial given the important nature and the world leading capability the RN’s mine counter measures force brings to current operations in the Middle East.
“It is especially pleasing that the Royal Navy is working with a long-established Liverpool family business which is brilliant for the local economy here in the home city of the North of England and Isle of Man Naval Regional Headquarters.”
• Isle of Man • Middle East • northern England
Email