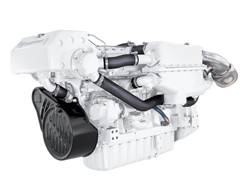 John Deere Power Systems (JDPS) announced a new 410 kW (550 hp) recreational vessel rating for the 6090SFM75 marine engine. The PowerTech 6090SFM75 recreational rating joins the 6068SFM75 298 kW (400 hp) and 6135SFM75 559 kW (750 hp) recreational ratings to offer customers a complete lineup of John Deere marine engines that are rated for high-speed recreational craft such as sport fishing boats and planing hull yachts.
This new John Deere marine engine rating is due to hit the water in November 2011 as an addition to the current 6090SFM75 242 kW to 373 kW (325 hp to 500 hp) power options. This new engine rating meets EPA Tier 2 and EU emissions requirements and is MARPOL Annex VI compliant.
“We have taken some extra time to introduce this new 550-hp rating for the 9.0L marine engine to make sure that we’ll maintain the legendary reliability and durability for which John Deere engines are known. With a 550-hp 9.0L class engine, we have given our customers what they’ve been asking for — competitive power and John Deere toughness,” said Dave Flaherty, marine marketing manager for John Deere Power Systems. “This engine is ideal for a variety of recreational applications such as sport fishing boats and high speed yachts — boats that we were underpowered for in the past. Our full lineup of recreational
ratings now provides naval architects and boat builders more choices in the 400 to 750 hp power range when designing and building boats for their customers.”
The PowerTech 6090SFM75 has 9.0L of displacement and offers up to 410 kW (550 hp). The 6090SFM75 is a 6-cylinder, electronically controlled, turbocharged and air-to-seawater aftercooled marine engine.