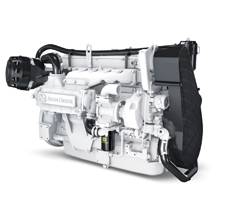 John Deere’s redesigned 6.8L marine engine is 229 mm (9 inches) narrower than the previous 6068SFM75 design, which offers a more compact engine for vessels with reduced clearances in the engine room. The 6.8L propulsion engine is due to hit the water in the fall of 2011, while the generator drive ratings will be available in 2012. The newly redesigned engine meets Environmental Protection Agency Marine Tier 2 European Union emissions requirements and is MARPOL Annex VI compliant.

“We have redesigned the 6068SFM75 in order to significantly reduce the width of the engine. Customers have been asking us for an engine that was more compact, so they could use it in their boat where there is not a lot of space available,” said Dave Flaherty, marine marketing manager for John Deere Power Systems. “This engine now gives them what they have been asking for — a small package with a lot of reliable horsepower.”

The PowerTech 6068SFM75 has 6.8L of displacement and offers up to 298 kW (400 hp). The 6068SFM75 is a 6-cylinder, electronically controlled, turbocharged and air-to-seawater aftercooled marine engine.“Based on competitive testing we know that this John Deere engine is more reliable than the competition, and now the smaller size gives us an engine in the 7.0L size range that will complement our 9.0L and 13.5L marine engines,” Flaherty added.This engine is an ideal choice for a variety of applications that include commercial fishing vessels, small work boats, sport fishing boats and high speed yachts.