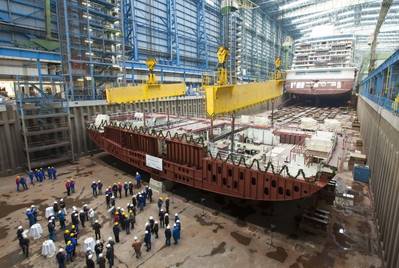 Norwegian Cruise Line executives and officials from Meyer Werft took part in the Keel Laying Ceremony of Norwegian Getaway at the shipyard in Papenburg, Germany. During the official ceremony, block number 34, the first of 73 blocks that will comprise the 146,600 gross ton vessel was lifted into the covered building dock, marking the start of the block assembly.

In the dock, Kevin Sheehan, Norwegian Cruise Line’s chief executive officer, laid the traditional "lucky coin," before the first block, weighing 530 tons, was placed by a massive crane. A special commemorative coin featuring the ship was created to celebrate the day’s activities.

“We are beyond excited to start construction of Norwegian Getaway, sister ship to Norwegian Breakaway,” said Sheehan. “The start of the block assembly is an extremely significant milestone and we eagerly anticipate the delivery of Norwegian Getaway in mid-January 2014.”

Norwegian Getaway is the second ship being built by MEYER WERFT utilizing a more efficient construction process which will deliver a ship of more than 146,000 gross tons in just over 12 months.

“Today we placed the first of the 73 blocks that form the structure of the ship,” said Bernard Meyer, managing director of MEYER WERFT. “We are proud to begin the construction of Norwegian Cruise Line’s second Breakaway-class ship and to continuing our partnership with one of the most innovative cruise lines in the world.”