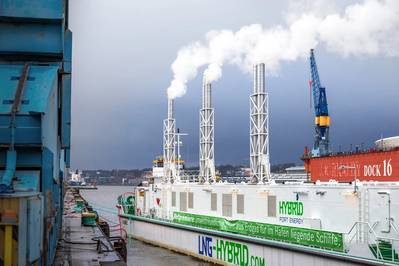 Becker Marine Systems informs that the program of technical trials for its Hummel LNG Hybrid Barge has been completed. The commissioning of the barge for low-emission power supply to cruise ships lying at port in Hamburg can thus start in May 2015.
“The operation of all five of the Hummel’s generator sets recently took place as part of class acceptance,” stated Dirk Lehmann and Henning Kuhlmann, both Managing Directors of Becker Marine Systems. The trials of the gas motors powered using low-emission liquefied natural gas (LNG) fuel at the Port of Hamburg represented a departure for both Bureau Veritas, the French classification society, and the authorities involved.
In collaboration with Bureau Veritas, the overall LNG Hybrid Barge system was tested and a variety of large load impacts and load spikes were simulated. The overall load transfer of 0 to 7.5 megawatts of power was achieved well below the time of two minutes set by the classification society. “In addition, the trial generation of power for a large Hamburg-based company was already successfully tested in December 2014,” Lehmann and Kuhlmann added.
“The overall LNG Hybrid Barge system with gas motors is an impressive technical achievement. The trials were also a milestone for classification,” said Hans J. Gätjens, Vice President Marine at Bureau Veritas, responsible for the Central Europe region. “There is thus nothing standing in the way of the LNG Hybrid Barge’s first planned supply of power to cruise ships over the course of May.”
The LNG Hybrid Barge was launched in Komárno, Slovakia at the beginning of September 2014 and was christened the Hummel following successful passage to the Port of Hamburg. It works like a floating power plant and, compared to conventional marine diesel with 0.1% sulphur content, emits no sulphur dioxides or soot. Emissions of nitrogen oxides and carbon dioxide are also significantly reduced. The deployment of the LNG Hybrid Barge will thus significantly improve air quality in port cities.
• port of Hamburg • Dirk Lehmann • Becker Marine Systems
Email