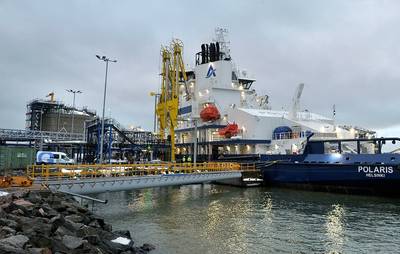 Polaris, the newest icebreaker of the Finnish icebreaking service company Arctia, set out from Katajanokka, Helsinki, for icebreaking duty in the Bothnian Bay and arrived January 10 for bunkering at the Skangas liquefied natural gas (LNG) terminal in Pori, where the vessel received approximately 700 m3 of LNG.

“Polaris arrived via Utö through the Turku Archipelago to the Skangas LNG terminal in the Tahkoluoto harbor in Pori. The Pori terminal is located by a deep and wide fairway, so it was easy to access and we kept on schedule. At the terminal we stocked up on food provisions and received almost 700 m3 of LNG fuel,” said Polaris Chief Officer Simo Haaslahti from Arctia.
“Our tanks are now full and we can head north for some serious icebreaking action,” said Polaris Chief Engineer Juha Kannisto from Arctia.
As Finland’s first icebreaker using the liquefied natural gas (LNG) as one of its fuels, Polaris is the world’s most environmentally friendly and efficient (22 MW) icebreaker, compliant with the emissions regulations of Emission Control Areas (ECAs) such as the Baltic Sea.
Polaris was ranked as one of Maritime Reporter and Engineering News’ “Great Ships of 2016.”
”We’re happy that the icebreaker’s now about to set out for icebreaking duties and we're able to supply her with LNG, a fuel that has excellent environmental properties as its sulfur dioxide, particulate, nitrogen oxide and carbon dioxide emissions are very low. Thanks to LNG, the engine exhaust gases also contain hardly any nitrogen oxides, which are particularly harmful as regards issues such as the eutrophication of the Baltic Sea,” said Skangas Sales and Marketing Director Tommy Mattila.

Skangas' terminal at the oil and chemical harbor Tahkoluoto in the Port of Pori is Finland’s first active LNG terminal.
“Since its recent opening, our Pori LNG terminal has already been called at for bunkering by vessels including the fast ferry M/S Megastar and the product tanker Ternsund,” Mattila added.
• liquefied natural gas • LNG terminal • natural gas
Email

Siem Offshore said one of its dual fuel platform supply vessels (PSV) has been upgraded with a hybrid battery package, in…