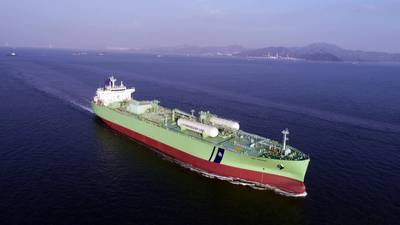 BW LPG announced it will retrofit three additional vessels to make them dual fuel capable, brining to 15 the number of its ships slated to be equipped for running on both fuel oil and liquefied petroleum gas (LPG).

The Oslo-listed shipowner, part of the BW Group, announced in 2018 that it would initially equip four very large gas carriers (VLGC) with the novel propulsion solution. Later, two four-vessel options were confirmed with this new three-vessel option making a total of 15 vessels slated to have their MAN B&W 6G60ME-C9.2 type engines retrofitted to MAN B&W 6G60ME-C9.5-LGIP dual-fuel types.

The latest option confirmation follows the successful ME-LGIP conversion in late-October 2020 of the main engine aboard BW LPG’s LPG carrier BW Gemini, the world’s first commercial vessel to be propelled by a two-stroke LPG dual-fuel engine.

BW LPG has previously commented on its choice of retrofits over newbuildings where Pontus Berg, Executive Vice President, Technical and Operations, LPG, said, “Retrofitting allows us to minimize our carbon footprint – the process emits up to 97% less carbon dioxide compared to a newbuilding construction. Retrofitting also means that we do not add additional tonnage that the world does not need. In addition, BW LPG’s fleet is already widely recognized amongst charterers for its efficiency, and so retrofitting its vessels to dual-fuel LPG would help to further reinforce the company’s strong reputation in this area.”

Bjarne Foldager, Senior Vice President and Head of Two-Stroke Business at MAN Energy Solutions, said, “There is no doubt but that we are moving towards a zero-carbon future with a strong global push towards sustainability. These new conversions display BW LPG’s commitment to decarbonization and showcase our dual-fuel engine portfolio that is future-proofed to handle whatever alternative fuels come to prominence in the decades ahead.”

Foldager added, “Apart from the 15 retrofits for BW LPG, three new orders in November bring our current total of newbuilding orders for the ME-LGIP engine up to 51 – a number we expect to significantly increase this month [December 2020].

“The vast majority of current orders for LPG carriers over 30,000 cubic meters are with ME-LGIP technology, enabling these vessels to use their own cargo as fuel in the future. In my view, LPG as a low-carbon fuel is well on its way to becoming the new market standard in this segment.”

With LPG as a marine fuel, the BW Gemini’s output efficiencies rise by around 10% against fuel oil, which will in turn generate notable gains in total voyage fuel-economics. This, along with other advantages, secures LPG’s position as a long-term, sustainable marine fuel.

Cost-wise, LPG is also a better option than compliant fuel oil, with high lifetime-savings prospects. By leveraging LPG as a marine fuel, BW LPG’s vessels benefit from savings due to lower fuel consumption and full dual-fuel flexibility, which guards against price sensitivity to post-2020 fuel price fluctuations. Furthermore, the ability to use LPG cargo as a supplemental fuel source also reduces time and fees for fuel bunkering.

Simultaneously, MAN PrimeServ’s research showed that a retrofit would be the most environmentally friendly solution. A retrofitted vessel generates 35 times less CO2-emissions compared to a newbuild vessel and, compared to 2020-compliant fuels, using LPG as a fuel would reduce SOx by 99%, CO2 by 15%, NOx by 10% and particulate matter by 90%.

Alfa Laval said it has won an order for three units of the Alfa Laval FCM LPG, the low-flashpoint fuel supply system (LFSS)…