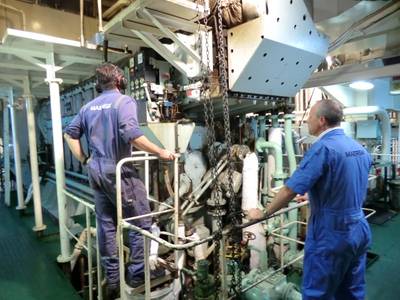 Maersk and the U.S. Navy collaborate on biofuel initiative.

Maersk and the U.S. Navy are testing algae-based biofuel on the container ship Maersk Kalmar. The ship is en route from Northern Europe to India. Maersk Kalmar has two key attributes that make it a suitable vessel for biofuel testing. The 300 meter-long container ship has a dedicated auxiliary test engine, which reduces the risks of testing, and its fuels system has a special biofuel blending equipment and separate tanks.

In October 2010, Secretary of the Navy Ray Mabus visited Maersk headquarters in Copenhagen, Denmark and learned of energy conservation initiatives across Maersk’s fleet of over 1,300 vessels. These programs fit well with the Navy’s interests in increasing fuel efficiency and reducing emissions. The biofuels test is the first collaboration between Maersk and the U.S. Navy’s Naval Sea Systems Command (NAVSEA). “The shipping industry needs to dramatically reduce greenhouse gas intensity in the coming decades. In the short term, we can gain a lot by focusing on improving fuel efficiency. In the longer term, we would like to see sustainable biofuels become a commercially available, low-carbon fuel,” said Jacob Sterling, Head of Climate and Environment at Maersk Line.

During its month-long, 6,500 nautical mile voyage from Bremerhaven, Germany to Pipavav, India, the ship will use 30 tons of biofuel. Engineers and crew onboard are testing blends ranging from 7% to 100%. The team is also analyzing emissions data on NOx (nitrogen oxides), SOx (sulphur oxides), CO2 and particulate matter from the fuel use, along with effects on power efficiency and engine wear and tear. Tests are scheduled to conclude in early December with an analysis of results following soon thereafter.

The biofuel test brings together several companies across the A.P. Moller – Maersk Group: Maersk Line, the world’s largest commercial container carrier; Maersk Maritime Technology, a research and development center of excellence for ship technologies; and Maersk Line, Limited, which owns and operates U.S. flag vessels and has worked with the U.S. Navy for nearly 30 years. “We expect to identify an optimal blend of distillate and biofuel that will meet the more stringent requirements of the International Maritime Organization’s forthcoming emissions regulations,” said David Anderson, Maersk Line, Limited’s technical representative for the project.

“The test is part of a journey to spur innovation in fuel R&D, diversify the fuel supply and improve environmental performance. It is a long-term goal Maersk shares with the Navy,” added Anderson.