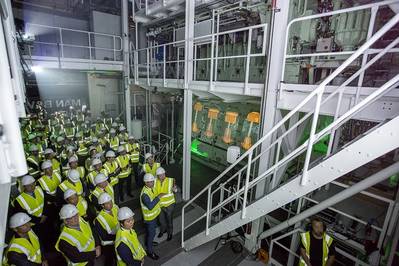 MAN Energy Solutions has announced that its two-stroke, dual-fuel portfolio has now logged over 500,000 operational hours.

The milestone stems from the confirmed 250+ sales the company has won within its entire portfolio of dual-fuel engines – all running on LNG or other, clean fuels such as LPG and methanol.

MAN Energy Solutions’ ME-GI (-Gas Injection) and ME-LGI (-Liquid Gas Injection) engines form the core of its two-stroke, dual-fuel portfolio and have notched many notable industry-firsts since their introduction to the market, including the very first oceangoing ships driven respectively by LNG, methanol, ethane and LPG.

Service reports have also been positive with the company stating that recent experience from a 174,000 cubic-meter LNG carrier powered by an ME-GI engine logged reliability and availability figures of 99%.

With the marine industry waiting to see how fuel prices and availability evolve after 2020, which will have a significant impact on shipowners’ choice of new engines, MAN Energy Solutions expects – for new or existing, electronically-controlled MAN B&W-branded engines – the choice of retrofitting to ME-GI or ME-LGI engines to ultimately become a necessity.

The ME-GI engine – the new industrial standard
MAN Energy Solutions successful ME-GI (-Gas Injection) engine has set a new industrial standard for two-stroke propulsion engines aboard – among others – LNG carriers, container vessels, car carriers and bulk carriers. The ME-GI engine provides ship-owners and operators with a peerless solution within environmentally friendly and high-efficiency, two-stroke technology, without the greenhouse emissions such as methane slip, which is a hallmark of competing engines.

The Diesel principle provides the ME-GI engine with high operational stability and efficiency, including during load changes and fuel change-over, while defining properties such as a stable change-over from fuel to gas with no fuel-penalties are maintained. The ME-GI engine is the most environmentally friendly, technology available within the two-stroke engine segment.

The ME-LGI solution
With a new injection concept, initially developed for methanol, the ME-LGI concept greatly expanded the company’s dual-fuel portfolio and enabled the exploitation of more low-flash-point and low-sulphur fuels such as ethanol, dimethyl ether and LPG.

The ME-LGI came about due to interest from the shipping world in operating on alternatives to HFO. Methanol and LPG carriers have already operated at sea for many years and many more LPG tankers are currently being built as the global LPG infrastructure grows. With a viable, convenient and comparatively cheap fuel already onboard, it makes sense to use a fraction of the cargo to power the vessel with an important, side-benefit being its positive, environmental performance.

The Maritime Energy Transition
MAN Energy Solutions believes that it is time for what it calls a ‘Maritime Energy Transition’ to find clean, decarbonized solutions for seaborne trade and transportation. Essentially, it is the company’s call to action to reduce emissions and establish natural gases as the fuels of choice in global shipping. It strongly promotes a global ‘turn to gas’, driven by the IMO, and a common approach by the shipping industry and politics to invest in infrastructure development and retrofits.

To date, MAN Energy Solutions’ entire portfolio of dual-fuel engines has won almost 400 projects in total, all running on clean fuels such as LNG and LPG, testament to its leadership within this critical market segment.