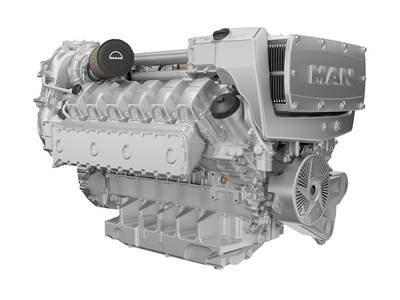 MAN announced it will present a newly developed 12-cylinder V-engine for use in working vessels at the SMM 2014 trade fair in Hamburg, Germany. The German engine manufacturer will thereby extend the power range of its high-speed marine engines for heavy-duty operation up to 735 kW (1,000 hp).

According to MAN, its MAN D2862 LE441 proves particularly efficient if the costs over its entire lifecycle are taken into account; even with a specific consumption under full load at maximum torque, the 12-cylinder engine has an outstanding minimum consumption of 192.3 g/kWh. Furthermore, it features oil change intervals of 600 hours and average overhaul intervals of 18,000 operating hours. Individually mounted cylinder heads also ensure ease of service, which allows MAN's solid power unit to shine when it comes to cost-effectiveness calculations.