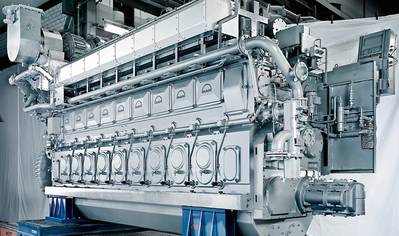 MAN’s scope of delivery covers two shipsets, each including a propulsion package consisting of two 9L32/40 engines, a MAN Alpha twin-screw VBS860 CP propeller, single marine reduction RSVL-800 gearboxes from Renk, plus a selective catalytic reduction (SCR) system that enables the engines to fulfill Tier III in liquid mode.
Jiangsu Haixin Shipping Heavy Ind. will construct the vessels at its yard in China, with delivery scheduled for end-2016. MAN Diesel & Turbo will build the engines at its Augsburg plant in Germany.
“This new project is an excellent reference for us in the Chinese market,” said Lex Nijsen, Vice President and Head of Four-Stroke Marine - MAN Diesel & Turbo. “It is of especial interest to MAN Diesel & Turbo in that these two newbuildings will be identical, sister vessels to a dredger previously ordered by Jiangsu, but whose propulsion packages did not feature MAN engines.”
Considered a workhorse in the industry, the 32/40 commonly sees service for 24 hours a day with a power output that ranges from 3,000 to 9,000 kW, the manufacturer said. According to MAN, the engine is characterized by low wear-rates and long maintenance intervals, with output limited to 100 percent of rated output for engines driving a propeller, and 110 percent of rated output for engines driving a generator.
• Diesel • Germany • Lex Nijsen
Email