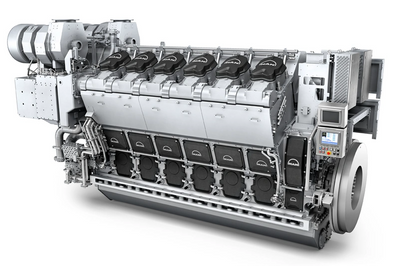 The contract was announced today but was awarded and signed late last year, a Seaspan Shipyards spokesperson confirmed to MarineLink.

Seaspan held a steel cutting ceremony in June 2018 for the first of two JSS it plans to build for the Royal Canadian Navy. The new naval supply ships will deliver fuel and other supplies to vessels at sea in support of the Navy’s defense and humanitarian missions, and they’ll also offer medical/dental facilities and provide support for helicopter operations and equipment repair. Once completed, the 173-meter vessels will be among the largest ships ever constructed on Canada’s West Coast.

Work on the MAN power an propulsion components will take place at the manufacturer’s established facilities in Europe. The integration for these systems, training, testing and support during the harbor acceptance trials and the sea acceptance trials will be performed in Canada.

“Seaspan Shipyards is pleased to announce this major contract award for MAN Energy Solutions Canada to provide a crucial system for the Joint Support Ships. Contract awards like this mean that the women and men of the Royal Canadian Navy will benefit from state of the art systems aboard these new vessels,” said Mark Lamarre, Chief Executive Officer, Seaspan Shipyards.

In addition, as a result of this contract, MAN is investing in new facilities and creating jobs on Canada's Atlantic and Pacific coasts. The company has already invested in systems integrator Aspin Kemp and Associates (AKA) from Prince Edward Island, thus supporting the Government of Canada’s objective to reestablish and grow the Canadian maritime industry and provide access to world markets under the National Shipbuilding Strategy (NSS). MAN is also supporting education initiatives and has provided the British Columbia Institute of Technology with the largest training engine on the West Coast.

Kamen Stoykov, Marine Sales & Projects Manager, MAN Energy Solutions Canada, said, “MAN is proud to partner with Seaspan Shipyards under the National Shipbuilding Strategy to provide our state of the art power generation and propulsion systems for the Royal Canadian Navy’s new Joint Support Ships. MAN has been leading the way in advanced engineering for more than 250 years and we pride ourselves in providing our customers with expert level project management experience on power generation and marine projects.”

MAN is one of several major systems integrators that Seaspan is working with in order to meet its commitments under the NSS. With its work under the NSS, which includes building ships for the Canadian Coast Guard (CCG) and Royal Canadian Navy (RCN) in Canada, Seaspan has developed more than $850 million ($637.2 million US) in committed contracts with approximately 570 Canadian companies.

The Honorable Carla Qualtrough, Minister of Public Services and Procurement and Accessibility, said, “The National Shipbuilding Strategy is helping to rebuild a strong, sustainable marine sector in Canada. This contract is part of our government’s plan to provide more meaningful business opportunities to companies across the country to help the sector grow and thrive. Congratulations to Seaspan and MAN Energy Solutions Canada on this important contract.”